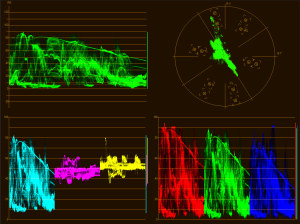 Once a new editor has learned the basics of editing video, there are a handful of tools that they should learn as they advance their skills. Oftentimes simple to grasp tools get left behind in favor of more flashy effects and filters. Today I want to talk about a couple of easy tools that will improve the overall polish of your video: the vectorscope and waveform monitor. While clicking around your editing software, you may have stumbled across these screens and quickly clicked away, intimidated by their abstract appearance. Without having any background information about what you're seeing, understanding what these tools mean can be difficult, but as any professional will tell you, it's essential to look over your video with these monitors open before outputting a final product.

In order to understand what they're used for, we need to know why we need them. It all has to do with brightness, contrast, and color saturation. As most video editors know, what you see on your screen might not be exactly what your viewer sees on their screen. Now, I know what you're thinking. Just calibrate your monitor and you'll be fine! Unfortunately, it's not that simple. Your eye's perception of color will change depending on your surroundings. If there's a window next to your editing bay, for example, you may over-adjust the brightness of your video because your eyes and brain are calibrated for a brighter environment. The solution lies in tools that tell you exactly how bright and how saturated your images are.

Let's start with the vectorscope. A vectorscope shows you just how saturated your image is and where the pixels in the image land on the color spectrum. In the overlay, you'll see several boxes just inside the circle marked R, Mg, B, Cy, G, and Yl. These represent important colors of the color spectrum based on the colors in the traditional color bar test pattern (red, magenta, blue, cyan, green, and yellow). The more saturated a pixel is, the further toward the edge of the circle it will be marked. The proximity to one of the overlay boxes it is tells you what color it is. In the example below, we can see the image is moderately saturated with a large amount of saturation lying between blue and cyan (likely the blue from the window in the background) and a hot spot of red saturation (likely coming from the red binder in the background). The rest lies in less saturated reds and yellows (skintone and the beige wall).

[image:blog_post:12947] So what have we really learned from this information? If you wanted to isolate the red binder or the blue window for color correction, you'd have a pretty good idea of what colors to adjust in a color wheel. Additionally if you are worried about over or under-saturation, the vectorscope will give you a good idea of where your image is. Next is the Waveform Monitor. This tool shows us the luminance information from our image. Along the side we see a vertical series of numbers. These numbers represent the IRE, that is the intensity of the signal. In video, 0 is pure black, and 100 is pure white. Unlike the Vectorscope, these values somewhat represent where the signal is coming from in the image. That is, the values on the left side of the waveform monitor represent brightness values on the left side of the image. In the example below, we can see that our image is generally brighter on the left and gradually darkens the further right we go.

[image:blog_post:12948] Now what can we learn from this information? Based on the waveform, it looks like we have room to brighten up the image a bit, as our brightest point in the image only hits 95. Similarly, the black shirt on the left side of the screen is already pretty close to 0. If we darken the shadows, we'll be able to watch as all detail in the shirt vanishes while it's crushed to complete blackness. That's information that we can could only see by looking at the waveform monitor, as our eyes probably can't identify a 95 vs a 100 IRE value color unless the two are side by side. I'm not interested in crushing the blacks, but by increasing the overall gain, here's what we can move our image to. It's a subtle change, but a welcome touch of polish.

[image:blog_post:12949] The next time you're finishing up a video project and are doing some color correction, keep your vectorscope and waveform monitors open. They are easy tools to read at a glance and will vastly improve your ability to spot problems or possibilities with your video's color.