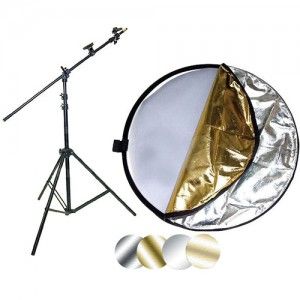 I've shot video of a variety of subjects on an uncountable number of locations, and while I don't always take every light I have with me, there's one lighting tool that never leaves my road kit. As you're planning a shoot, remember that before you add artificial light to a setup, you should always see what you can do with the natural light you have.

That's why the first tool on my lighting checklist is a five in one collapsible reflector. Actually, make that two reflectors. These babies are invauable in controlling light when you don't (and even if you do) have the ability to provide light yourself. Each comes with a gold surface, silver surface, gold/silver combo surface, soft white surface, and a slightly transucent base for diffusion.

Lighting is all about placing and controlling shadows. A reflector exceles at both of these. When shooting in almost any scenario you will quickly find that the natural lighting isn't coming from an ideal angle. Indoors, it might be straight overhead or coming in from a window. Outdoors, you may be contending with a street light or the sun. These scenarios will likely cast shadows in a way that's unflattering to your subject. Use the gold surface on one reflector outdoors to re-direct sunlight and provide a quick key light. Use the white surface on the second to provide a fill, and combined with the sun, you have a three point lighting setup for about a hundred bucks.

Indoors, if you're dealing with oppressive overhead fluorescents, use your reflector to counter some of those dark shadows under your subject's eyes. If you're dealing with light from a window, simply placing a silver surface on the opposite side of your subject's face will bounce some of that blue sunlight back and you won't have that mix of red and blue light that is so common in indoor shoots. Reflectors are by nomeans a fix-all solution.

You still need at least one existing light source to get anything out of them. Often times, however, a reflector can replace a second or third light. They're easy to set up and cost a fraction of the price of a production light. That's why if you're putting together your first lighting kit, make your first purcase a couple of reflectors and you'll save yourself time and money down the road.

In our information-crammed lives, how many of us have been made to sit through coma-inducing fact-films or interminably tedious educational documentaries?Whether in school, at...