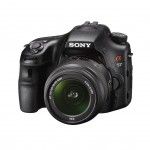 Sonys newest member in its ground-breaking DSLT cameras is the A57. DSLT, as opposed to DSLR, is Sonys way of describing their use of a translucent mirror instead of a traditional reflex mirror. Unlike traditional mirrored DSLR technology, Sonys DSLT process allows incoming light to be directed to the CMOS sensor and the autofocusing sensor, at the same time. This allows full-time continuous autofocusing during both still and video shooting. The A57 will be offered this April as a kit (SLT-A57K) with their 18mm – 55mm zoom for $800, or as body only (SLT-A57) for $700. This makes it the most affordable DSLT available in Sonys lineup. A wide variety of Alpha mount lenses are also available.

[image:blog_post:12963][image:blog_post:12964][image:blog_post:12965]
The new A57 is the successor to Sony’s A55, and offers improvements over that model. To start, theres the 16 Megapixel APS format CMOS sensor. Coupled with that 16MP sensor is Sonys proprietary BIONZ image processing engine which is also used in the higher end A67 and A77 DSLTs. The combined effect of the sensor and BIONZ processor gives higher quality, low noise images with a 100-16,000 range of ISO and full 1080/60p HD video capture. The 1080/60p is the new high standard in video capture for DSLRs. 24P HD video mode is also possible for those who want the cinematic look that this frame rate offers.
Shooters will also appreciate the faster 12 frames/second shooting speed to capture lifes fleeting moments. Usually, this faster frame rate is only possible in more expensive DSLRs. The A57 also has the same 15-point autofocus system as the A65. An enhanced object tracking focus keeps faces in focus, even if they are obscured momentarily by other objects.
Other great features in the A57 include Auto Portrait Framing, and Picture Effects. Auto Portrait Framing, a worlds first from Sony, uses Face Detection and the Rule of Thirds to crop a portrait into a more professional image. Both original and cropped versions are saved. Picture Effects allows the artist in all shooters to be explored without the use of a computer. Eleven different Picture Effects with 15 variations are possible, including Pop Color, HDR Painting, and Miniature Mode.
The Tru-Finder electronic viewfinder has a high resolution 1440k display and allows real time framing, focusing, and preview of stills or video captured. The 3-inch adjustable LCD also provides a wide screen Live View mode.

For more information about the new A57, contact Sony at www.sony.com andread our review of the A33 here.