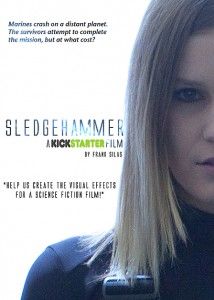 We're always interested in stories of up-and-coming indie movie projects. One such project that caught our eye was Sledgehammer, an Aliens-inspired science fiction film about a group of space marines marooned on a distant planet full of hostile monsters. The design of the monster was what really did it for me. The concept art, by 3D artist Wesley Griffith (who also worked on Dan Trachtenbergs Portal: No Escape) shows a nasty spiny insectoid, something like a giant sand flea, sure to inspire the heebie jeebies in any arachnophobe.

Science fiction is one of the most difficult genres in independent film, for obvious reasons: Science fiction means special effects and special effects cost money! So we had to know, how do you make a critter like that on a budget? The man behind Sledgehammer is 15 year veteran 3D video game artist Frank Silas, who has worked with Rockstar Games and Activision Blizzard; he previously directed the award-winning short film Box on a shoestring budget of $2000, but Sledgehammer promises to be a more ambitious special effects extravaganza. He's using Kickstarter to raise the money to make this film a reality. Frank spoke to Videomaker about the challenges of putting together an independent science fiction movie, sharing some tips about finding funding, recruiting actors and creating special effects on a tight budget. Aspiring sci fi directors, take note!

VM: What have you learned from working on Sledgehammer?
FS: I learned about being an Executive Producer. If you are able to bring in active investors at the target amounts you need per film then you can make any film you want. That's the rub, because those two things are directly proportional. So in most cases you will not be able to make exactly the film you want. I've learned to be detached from the details just as long as I like the outcome. I write the script that I want to write, then we shoot what we are able to shoot based on locations, crew, cast etc. Then we edit what we have to turn that into the best possible film it can be. Even in post production it depends on how many people or how much time we can put on to it, but that keeps each stage of the process an adventure, somewhat experimental which frees me to not only shoot more films, but to enjoy the work more. I could see the struggles of other directors who have a crystal clear vision that they want reproduced from their mind's eye with complete fidelity. I dont want to struggle against the film making process. I want to enjoy it and I want my crew to enjoy it.

VM: Besides Kickstarter, what other alternative funding options have you explored?
FS: I brought on a couple of friends to help me pay for the live action shoot. That's what allowed us to shoot the film in the first place. It's tough to be an Executive Producer on your own film as a Director. Our purpose on Kickstarter.com is to raise funding to create the visual effects for the film. Our studio normally shoots DSLR on Cannon 5D Mark ii and Cannon 7D. With this film we were able to get our hands on a RED Epic from one of the same companies that supplied RED Epics for Ridley Scott's Prometheus. So now we need to do vfx at a very high resolution, which means insurmountable render times unless we acquire the proper software and hardware tools to deal with that.

VM: What advice would you give to other aspiring filmmakers?
FS: The advice I would give to other film makers working on low and micro-budget films is to be a bit more Depak Chopra about it. Your careers will last longer and so will your crews. As for the Sci Fi Film aspect, you're really going to need to love it. It is the most difficult kind of film to do. It also takes the longest amount of time to make. It cost more than any other type of film to produce, but if you can hit a home run there…those fans are forever. I know, I am a sci fi fan thanks to George Lucas, Ridley Scott, and James Cameron. Sci Fi raised me. [image:blog_post:12944]

VM: How did you find the right actors for Sledgehammer?
FS: We screened over 30 actors to discover the cast we have on Sledgehammer! We were very selective about those 30. I promised all of the backers of our Kickstarter to tell them first exactly how we found the actors and what we were looking for. We'll even show you the process we went through to get them ready in the feature length documentary we are shooting on the making of Sledgehammer, provided our Kickstarter is successful! [image:blog_post:12945]

VM: What was your idea for how the alien should look? How do you build a good alien when you're on a budget?
FS: Building an alien on a budget really comes down to what you are trying to accomplish with that character in your film. For us, we knew that there wasn't just going to be one alien and since I'm a 3D Artist with 3D Artist friends creating our aliens in 3D just made sense. Not everyone can do that on a budget, but we already had that background coming into this production. With the alien design, I wanted to create something that people have not seen before. It needed to look believable, but not quite like anything else. I call it a cross between JJ Abrams, Starship Troopers, and Avatar. I want the audience to feel scared, intimidated, grossed out when they see it. The thing is the size of a mini-van. Here's a spoiler, that's not the only monster in our movie.