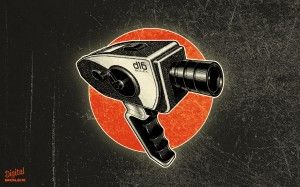 Remeber Bolex? The Digital Bolex D16 is raring to shoot uncompressed 2K video after it begins shipping this Aug.

You may have seen it at SXSW film festival or maybe on Kickstarter.com where you can pledge money – $2,500 was the minimum to reserve one of these cameras. The fact is, many of the cameras that small businesses and video enthusiasts use will cost as much or more than the Digital Bolex D16.

It shoots both 2048×1152 and 1920×1080, sports 12-bit 4:4:4 color, and even comes with a pistol grip. It's like this camera is created for movie and film lovers – three XLR inputs, up to 90fps (32fps at 2K for cinema quality) and storage on CF cards with an SSD buffer drive. Built with milled steel and hard plastic, old cameras can't help but creep into the imagination, at 5lbs. and 8-inches for its longest dimension this is likely to look small and feel quite dense but remember that this is contending with pro camcorders and DSLRs.

As with many video or film fanatics, the Digital Bolex D16 has its oddities, for one, Adobe CinemaDNG appears to be the only video format to accompany the TIFF and JPEGs for stills. The sensor is a Kodak CCD similar in size to Super 16mm and the video out is either with a B&W 1/8-inch jack or optional HD-SDI. There is an internal battery pack and power travels through a 4-pin XLR.

[image:blog_post:12952] The creators include Joe Rubinstein and Elle Schneider, who were considerate to make standard C-mounts, optional PL, EF, and B4-mounts; and then for your computer work, they include a USB 3.0 cable and transcoding/conversion software. They've also started making some fun videos and have lots of fun art throughout, including T-shirts and more for their Kickstarter supporters.

We'll be keeping an eye on the Digital Bolex D16 (MSRP $3,300), as will many of the top camera manufacturers!