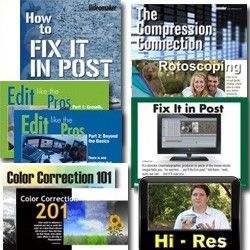 Last week we looked at one new tool for tidying up your videos in post-production. The Fix it in Post DVD is Videomaker's answer to the eternal question, "Oh no, this footage is messed up! What do I do now?" We like to think that the Fix it in Post DVD will help answer any post-production mess that you could encounter, from washed out colors to shaky camera work. But we know that's not really the case: There's always going to be some new problem that you've never encountered before, that we didn't have the time or foresight to cover. What then? What if you need more help?

We were worried about just that situation, so we put our heads together and came up with something brilliant. It's the Fix it in Post Ultimate Toolkit. It's got all the same great info about fixing static-muddled audio, ramping up bland colors, deinterlacing footage, steadying nausea-inducing shakes, changing frame rates, and subtly erasing unwanted objects — plus a ton more that we weren't able to cram onto a single DVD.

Edit Like the Pros #1 (eDoc)
Get your act together! Everyone wants to "edit like a pro". But what does that really mean? Learn how to use your space and time effectively.

Edit Like the Pros #2 (eDoc)
Beginning editors concentrate on how to do the tasks of editing well. The professionals change their perspective. Learn how to shift your perspective from simply "how to do things" to how things should be done.

Fix It In Post (eDoc)
If the footage you just shot has problems, all is not lost. You can fix it! Ever get a sinking feeling when you review your footage and discover problems? Maybe it's a sound you do not want or a camera shot that was too jittery. A lot of things go overlooked while shooting, only to show up as problems during the editing process. The good news is that your footage is probably salvageable with the proper techniques.

Scoping Out Your Video (eDoc)
Many editing software programs offer a variety of colorful scopes to help enhance the hue, color, and brilliance, among other editing tweaks. But how do they work?

Fix it in Post (DVD)
This DVD covers all the constant bugaboos of video creators: Washed-out color, shaky camera work, hisses and hums and annoying electrical noises, even the dreaded visible boom mic. But the worst part? No matter how careful you are, you're sure to meet them time and again over the course of your video career. Learn how to stop them! Adobe software is used as demonstration software, but this DVD teaches theory and techniques that can be used in most current editing programs.

Rotoscoping (Multimedia)
Do you want to make your hero fly? Stand your talent behind a virtual news desk? There's nothing you can't do with the right tools and skill-set. This tutorial teaches you how to realistically do this using rotoscoping tricks with Adobe After Effects.

Compression Connection (Multimedia)
If you want your video to sound professional, you need to use compressors. This tutorial explains the process and how to compress your audio for the best sound results. This is a segment from Editing, part of our popular multimedia tutorial DVD-ROM series.

Color Correction 101 (eDoc)
A few simple steps can save an improperly-shot scene or improve one that is less than brilliant.

Color Correction 201 (eDoc)
Ever want to enhance a washed-out sky or push the color on a less-than-vibrant hill of grass? This eDoc covers working with Secondary Color Correction aspects such as Filters, Style and Color Enhancement. Not to toot our own horn, but we're really happy to finally be able to offer this toolkit. Fix it in Post DVD is a great tool, but, if you're like me, you know that you need a lot of post production help. Some video creators have a sharp eye for detail; they like to carefully and meticulously dot every i and cross every t.

If that's your personality, you'll still make some mistakes — it's inevitable — but you'll be able to catch most of them before you make them. But if you're a shoot-from-the-hip rebel who's more attuned to worrying about the big picture… well, you might need a little extra help in post-production. (Don't feel bad if that sounds like you — I always get so excited during shooting that I end up with a bunch of problems that need fixing in post!)

Learn more about the Fix it in Post Ultimate Toolkit.