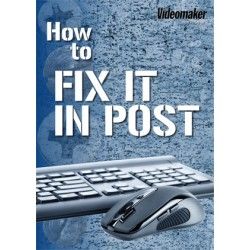 You know why filmmakers and videographers always say "We'll fix it in post"? Because there are some problems that you can't avoid no matter how many years of experience you have behind the camera. You probably met these unwelcome guests the first time that you shot any video footage. And maybe you shrugged your shoulders and thought: Well, I'm just a beginner. I'll learn to avoid these problems soon enough. That works for a lot of the problems you encounter in video production — you eventually develop a "videographer's instinct" for recognizing violations of the 180 degree rule and other video offenses before they happen — but these six tough customers never seem to go away. Why not? Well, because half the time they're due to factors beyond your control. Sometimes you can't even recognize that there's a problem until after you see the footage. In any event, these are the little monsters that you can only defeat in post production.

2) Interlaced Footage — It's great for broadcast convenience, but now your video has those tell-tale interlacing "lines" that will give your audience a real headache.

3) Shaky Footage — Jostling the camera a little bit can give your video a feeling of gritty realism, like in "Cloverfield" or "The Blair Witch Project." But too much and no one will be able to tell what's going on!

4) Weird Electrical Noises — What's that sound? Surely you were shooting in a silent room, right? Then how can it be that your footage is full of strange hums and buzzes? You might not hear it, but your equipment can pick up annoying frequencies thatyou might miss.

5) Incorrect Frame Rates — Here's one you probably won't even think about until it's too late! When you have to splice your footage together and you suddenly realize they've been shot at two different frame rates… that's always annoying.

6) Unwanted Objects — What's that boom mic doing there? You've seen this goof in even professional Hollywood productions, so you know it's easy to miss when you're behind the camera.

There's probably no stronger argument for why we have post production than that list. Those are certainly some of the most common gripes that we hear from video creators who're frustrated that they keep finding these "mistakes" in their footage, even after they thought they had carefully sidestepped them. When that happens, all you can say is: Thank goodness for post-production!

To learn more about these nasty issues and how to fix them, check out Videomaker's new Fix it in Post DVD.