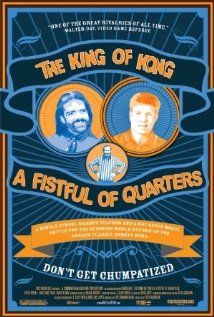 Many would-be documentarians get trapped into thinking that only sweeping, epic topics are acceptable fodder for documentaries. They just get stuck in that Ken Burns' Civil War mode of thinking. We've written quite a few times that doesn't have to be the case, that you can find the thread of a good documentary story in even seemingly trivial events and mundane lives. In fact, that's often where you find the most interesting documentaries!

Small scale documentaries are easier to fund (always a concern for the indie video creator), but more importantly they also often have an intimacy with their subjects that can get lost on more ambitious documentaries. If you don't believe me, take a look at the top five documentaries that investigated some weird topics that most people would not have guessed could sustain a whole movie — and came out with masterpieces.

1 The King of Kong: A Fistful of Quarters (2007) — A good documentary is all about interesting characters and human drama. If you can find those two things in your topic, you know you've got something with potential. And you should never underestimate humans' ability to invest even the most mundane things with profound meaning. Take video games, for example. The King of Kong follows video game enthusiast Steve Wiebe as he attempts to best the high score of world "Donkey Kong" champion Billy Mitchell. Most people would hardly think that a movie about two men fighting over a video game could be riveting, but this documentary makes Wiebe's quest so sympathetic that it's hard not to root for him to win! [image:blog_post:12987]

2 American Movie (1999) — Film fanatic Mark Borchardt dreams of making a big Hollywood blockbuster — despite the fact that he lives in the middle of nowhere, Wisconsin. "American Movie" follows Borchardt as he cobbles together his break-out horror feature "Coven" by hook or by crook. The film mines a lot of humor from its cast of laconic midwestern locals, who all look upon Borchardt's obsession with bemused sympathy, but it never treats them as a joke. While on one level "American Movie" is the story of one eccentric director, it also becomes the story of all people who struggled to achieve an "impossible" dream. [image:blog_post:12988]

3 Bob Smith USA (2005) — This documentary explores something so ordinary that it almost sounds like a joke. Neil Abramson picked the most common, run-of-the-mill name that he could think of, Bob Smith, and then interviewed seven wildly different men with that name, including a yoga instructor, a junk collector, a Christian minister who preaches at children's birthday parties dressed as a clown and an evangelical atheist who attends cocktail parties dressed as the devil. The result is a strange and hilarious cross-section of Americana that tells us more about the country's rich and varied character than you would have thought possible from a documentary about a name! [image:blog_post:12989]

4 In the Realms of the Unreal (2004) — During his life, Henry Darger was a reclusive janitor in a Chicago hospital. But in the privacy of his own apartment, Darger created reams of incredible fantasy collages depicting a parallel universe where children fought a constant war against evil monsters and, oddly, confederate soldiers. Through both interviews with his neighbors and excerpts from Darger's journals, the film struggles to understand what compelled Darger to paint such strange but compelling images — and helps us to understand how the act of creation gives our lives a greater purpose.

5 Winnebago Man (2009) — You may already know Jack Rebney as the viral video sensation "Angry Winnebago Man."[image:blog_post:12990] In the mid-80s, Rebney appeared as a pitchman in a series of promotional videos for Winnebago RVs, but it was the out-takes — in which a frustrated Rebney constantly breaks out in bizarre profanity whenever he flubs a line — that captured people's imaginations. The videos spread like wildfire over the Internet. Austin documentarian Ben Steinbauer was fascinated by the clips and sought out to track Rebney down to find out what he was like in person and what he thought of his unexpected fame. He was surprised to find Rebney living in secluded cabin in northern California. What could have been exploitative instead turns out to be a fascinating portrait of a man struggling under the burden of unexpected celebrity.

Those are just a few examples of the subjects that can be fertile soil for a good documentary. You can probably think of many more, just by looking around you. Still having some difficulty thinking of a topic?