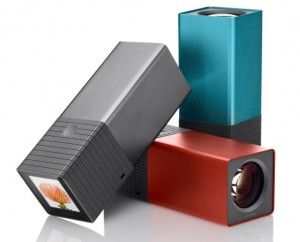 Earlier this year, Lytro unveiled a camera that lets you take a photo, then adjust the focus afterwords. The current model only shoots 1.2 megapixel still photos (1080×1080 to be precise), but Lytro CEO Ren Ng recently dubbed using the Lytro technology for video a possibility but noted that it would need more processing power. Considering Lytro is a consumer product, it's not outside the realm of possibility that a prosumer priced camera could meet the processing demands of a Lytro-esque camcorder.

I predict that not only will we see this technology used in video, but similar technologies will work their way in as well. Being the first product of it's kind, it stands to reason that what Lytro is currently showing us will improve with time. That is, it will be able to handle higher megapixel photos and video. Just look at the evolution of the digital photo in the last fifteen years as an example of how fast the technology could advance. I don't think anyone will be surprised to hear about a new generation Lytro product next year with double the resolution.

So if adjusting focus in post is really in our future, what's to stop technology from bringing us to the point where we can adjust exposure in post as well? We can already do amazing things with RAW formats, but there's still no solution for fixing truly under or over exposed footage. Technology advances at a pretty remarkable rate, and anyone who could rid the world of exposure issues would make a fortune patenting the technology.

Given how far photography and video has advanced in the last 100 years, it's not to difficult to imagine that in a decade or less, all we'll have to do is light and frame our images and not have to worry about focus or exposure. Of course, such technology will never eliminate the desire to manually adjust video and stills in the field, but everyone, from consumers to professionals, makes mistakes when they shoot.

Having cameras that capture a wide variety of focal depths and exposures simultaneously will be handy for everyone. Considering how much time and money these kinds of cameras would save in re-shoots alone, it's only a matter of time before someone develops the technology to make them a reality.