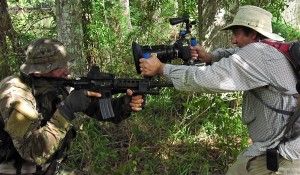 On February 24th, major Hollywood motion picture, Act of Valor, was released to theaters nation wide. While this isn't earth shattering news on its own, it is worth noting that the film was shot on the Canon 5D Mark II DSLR. Here is a camera that anyone can buy at their neighborhood electronics store being used on a blockbuster film. I've said it before, and I'll say it again: if you have any desire to make a movie, you have no excuse not to do it now!

"Nothing is as small and nimble as our Canon EOS 5D Mark II camera packages," said Act of Valor's director of photography. "Never have I been so excited by the creative possibilities a camera offers cinematographers." Now, obviously, this doesn't mean that Act of Valor's Hollywood level production budget is attainable for everyone, as the cost of lenses alone can dwarf the price of the DSLR body, but it does indicate the crumbling of one of filmmaking's most daunting barriers of entry.

Act of Valor isn't the first national release to use the camera. The 5D was also used to shoot the opening title sequence for the 35th season of Saturday Night Live, as well as an episode of House titled "Help Me" which first aired in 2010 on Fox. The continued popularity of prosumer DSLRs for video have caused the market to explode with new products targeted at DSLR shooters. Canon's 7D has become quite popular as of late, and Nikon's D800 and D4 appear promising.

"More than anything, what I love about the Canon 5D Mark II is that it's part of a global revolution," Hurlbut continued "The 5D Mark II is causing a paradigm shift in the production industry because it provides film-like quality combined with lightweight operation and amazing mobility. It's also affordable, so it's giving a lot of people a voice who've never had one before. I think the style of filmmaking that's going to come out of the use of the 5D Mark II will be a whole, fresh new style that hasn't even been named yet." While I would argue that the same could be said for many DSLRs currently on the market, it is true the accessibility of cinema ready cameras is changing the face of filmmaking.

You can read the entire press release from Canon about Act of Valor's use of the 5D Mark II on Canon's web site.