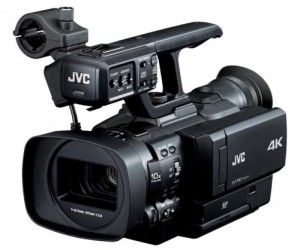 Shooting and working in 4K is nothing new to professional film makers and compositors, but with the announcement of the JVC GY-HMQ10 being priced at under $5,000, 4K is finally within reach of prosumer and hobbyist videographers. However, most TVs and computer monitors will still max out at 1080p, so what's the point?

Personally, I don't see 4096 3112 pixel TVs entering the average American's living room any time soon, since if you're sitting ten feet from the screen, the TV will have to be 80 inches before you'll be able to see the difference between 4k and 1080p. Even if your final output is still 1920×1080, you're still going to get quite a bit of use out of 4k footage once you're in post production. 4K footage is a whopping four times as many pixels as 1080p, and if you've ever had the experience of editing HD footage down to a final SD output, you know those extra pixels are a glorious luxury to have.

It's not uncommon to have a shot you'd like to crop and re-frame in post, and if you have four times the pixels, the amount of flexibility you have is enormous. Additionally, shooting high resolution for green screen keying will make your keying process much simpler. With four times the data, your keying software should have an easier time differentiating the green pixels you want to key from the edges of your subject.

Similarly, if you plan on doing any motion tracking, a more detailed image should help your tracker to stay on the points you've defined. Now for the bad news. Much higher resolution images means much bigger files. The JVC GY-HMQ10 shoots to a variable bit rate h.264 file, which should be manageable, but if you're editing in Final Cut Pro and have to trans-code to ProRes, file sizes are going to be enormous.

If storage is a problem, plan on shooting in 4k selectively, and sticking to 1080p for the bulk of your footage. It's worth noting that with files being compressed to h.264, much of the color data will be lost. We're excited to get our hands on some GY-HMQ10 footage to see exactly what we can do with it.