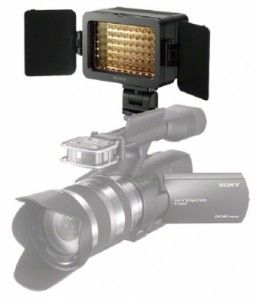 In one of the more interesting product moves, Sony announced that they'll be selling an LED video light that runs off of AA batteries or Sony V or M series batteries. The fact that it can run off of their V batteries means that this light should be able to last for quite some time in the field and won't require the constant purchasing of AA batteries. This is an advantage that LitePanels has only been able to match through third party adapters.

The light, which looks very similar to LitePanels' MicroPro LED offering, can be mounted on any Sony camcorder with a shoe mount. The LED light will be adjustable from 10% to 100% brightness and will include 60 powerful LEDs (which should be good for 1800 lux). Like many of the current LED lights, the Sony HVL-LE1 light will have a color temperature of 5500K, but thankfully will include a color conversion filter that can bring it down to the standard indoor color temperature of 3200 degrees Kelvin.

Sony's first foray into on-board LED lighting will also come with a diffuser and carry pouch for each filter and will be about 120 mm wide by 75 mm tall which should make it easy to carry in your existing equipment baggage. Beyond that, Sony has yet to list a price for the product but the fact that it's already listed on their website should be a good indicator that they'll be selling it soon.