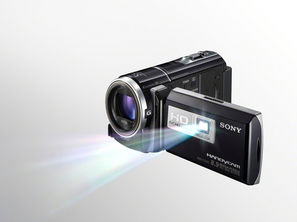 At their CES 2012 press event, Sony released their newest refresh to the Handycam camcorder lineup. Specifically, they debuted the HDR-PJ760V and HDR-CX760V, but I'm sure you don't care much about the model numbers. What you probably care about most is what these beasts can do. The camcorders can capture full HD 24p and 60p video along with an astounding 24.1 megapixel still image.

They're also touting their newest "Balanced Optical Steadyshot (I think I see a theme here too)" which is an image stabilizer that controls the entire optical path, including the image sensor, as one floating unit. They claim that this feature can make the camera 13 times more stable than its predecessor. Welcome news if you've ever tried to keep a device as small as their Handycam steady in your hands. In the new lineup, they've also seen fit to include a new wide-angle (26.0mm) Carl Zeiss lens, tilting electronic View Finder, and a 17X digital zoom which we hope you never have to use.

Sony has also kept their same Handycam camcorders with built-in projectors from last year by updating the image to be twice as bright as it previously was. They've also kept the EXMOR R CMOS image sensor and have included some professional features such as manual control of Iris/Shutter/Exposure/White Balance, an Expanded Focus for making sure the image isn't slightly blurry, and Zebra and Peaking settings. Not bad for a camcorder at this size and price.

We're not done yet. Sony also updated last year's first Double Full HD 3D camcorder lineup by adding the HDR-TD20V. If you recall, we reviewed its predecessor, the TD10 this last year in Videomaker magazine to some acclaim. Now, the new camcorder is actually 2/3rds the size of the TD10, weighing in at only 1.02 pounds. Sony also included the ability to geotag with it's built-in GPSreceiverfor those who want to remember right where they were when each shot was taken.

Each of Sony's Handycam camcorders can shoot 1920×1080 resolutions at up to 24 Mbps which should make for some high-quality HD content when editing. They also allow for Dual Recording of video and still images (though most of them do these days), and have some of the best image stabilization techniques in the business. All these factors combined make the new lineup from Sony very exciting. We'll give you more details about how each of these camcorders fare in future reviews!