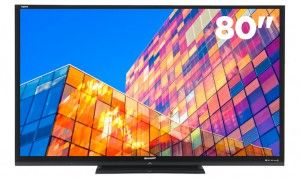 We all knew that we could expect some big things of the television manufacturers at CES. But an 80" 4K television? That seemed like just a dream. However, Sharp has made it a reality with their CES announcement of a truly astounding 80 inch 4K touch-screen television and large battery-run portable displays.

Their touch-screen televisions will be called the Aquos Board which Sharp imagines professionals drawing , taking notes, and saving information on. In addition, the televisions come with 4 HDMI inputs, a built-in WiFi controller (for streaming television), has a dynamic contrast ratio of 6,000,000:1, and a 120Hz signal. Each television will also have a USB port for playback of video, music, and photos making this a truly interactive television display.

If you're thinking about getting this for your next preview monitor or business meetings, it'll cost you a cool $13,795. A price that's not for the weak of heart. At the same time, Sharp also introduced another 80 inch television, the LC80LE844U, that has built-in WiFi, 4 HDMI inputs, 3D capabilities, a 240Hz signal, and Sharp's new AQUOS Beamzit, a free media-sharing app that allows users to wirelessly send photos, music, and video to the television using an Apple or Android phone.

Not to be outdone, Sharp also showed off its lightweight, WiFi enabled battery powered portable displays that can be carried from room to room. The smallest display in this line, the 20 inch model, weighs in at only 5.5 pounds. This technology means that it's possible to easily carry a preview monitor from work to home without having to find an outlet to plug your television into. Even if you plan on keeping the television where it is, the thinness of the display should ensure that you keep plenty of space in your living room. Lastly, Sharp also announced an ICC-4K television which provides four times the resolution of a 1080p television.

No word on when this television will be available or the cost, but it's already quite clear that the 4K revolution is upon us!

Just as you wouldn’t drive a car without insurance, you should also never shoot without it either.