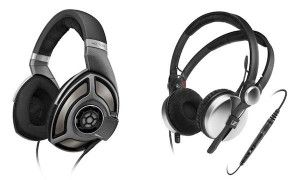 If you happen to have a thousand dollars weighing you down and are in need of some of the best monitoring headphones on the market, Sennheiser has released the HD 700 and HD 25 that might just be for you. Believe it or not, the HD 700 cans are actually quite a bit less expensive than their HD 800 offering that Sennheiser revealed last year at $1,500 a pair. A fact that can only be comforting to someone who needs to justify why an entire grand has gone missing from their bank account.

The headphones, as expected, have a great range of sound since they come with 40mm Duofol dynamic drivesrs and are capable of an incredible frequency response of 10 Hz to 42 kHz. For those who are real audiophiles, the HD 700 headphones are designed in such a way that the sound waves are directed to the ears at a slight angle which is supposed to result in a natural listening experience. In addition, the transducer is mounted in a high-precision gauze made of stainless steel which should get rid of any partial vibrations.

Sennheiser also added a ventilated magnet system that gets rid of any unwanted wobble in the diaphragm of the unit. However, whether or not these features are worth $1,000 is entirely up to you. Sennheiser also announced another inexpensive option for monitoring headphones with the HD 25. Apparently, these headphones had been popular among DJ's since they could cope with an extremely high sound pressure level. These headphones are expected to have a 16 Hz to 22,000 Hz range which ends up being almost half the range that the HD 700s can achieve (though to be honest most human ears can't hear tones higher than 20,000 Hz).

One of the more interesting part about these pair of cans is that they have a switchable cable that comes with a control for changing settings on an iPad or iPod along with being able to take phone calls with a built in mic. Though I can't think of too many DJ's that would be using this feature while rocking out beats, it's a nice feature to have nonetheless. The headphones will cost $350.

Lastly, for those of you who don't like cables, Sennheiser also revealed a new wireless headphone option at CES called the RS 220s. These headphones feature an uncompressed wireless audio transmission, digital and analog inputs, and include a charger that also serves as the audio transmitter as well. The headphones are supposed to work up to 300 feet away and have easy buttons for adjusting volume and input right on the headphones themselves. These beauties will cost $599.95