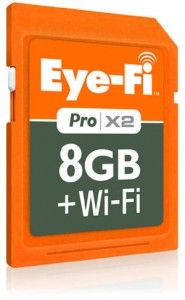 Eye-Fi's had it for years and now the SD Association (the standards organization for SD cards) has finally jumped into the fray. What's up for grabs? Wireless SD cards. The SD Association revealed it's intention to license out the wireless standard to SD card manufacturers at this year's CES. What this means is that somehow the people of the SD Association have managed to find a reliable way to pack even more equipment inside the already crammed SD card by adding a wireless transmitter.

This transmitter will allow you to download pictures or footage straight from a camcorder to your Mac or PC saving that extra step of having to plug in a cable or having to subject the card to the inevitable wear and tear of popping it in and out of a camera. I know that I've personally broken two of the fragile storage units myself in the course of a year, so this seems like a great move for SD card manufacturers everywhere. The wireless transmitter will work over the typical 802.11a/b/g/n standards and will work inside of any SD card type including SD/SDHC/and SDXC.

The amazing part? They've even squeezed this technology into microSD/SDHC/SDXC cards as well. Since these cards are so small and have a wireless transmitter at the same time, they can be useful as wireless control points for other devices such as TVs in a home network making USB wireless transmitters a thing of the past. The wireless technology will come in three flavors, a web interface which supports server upload and peer-to-peer functions; a home network interface which supports server upload and home network communication functions; and one that can do both in the same card (which will probably turn out to be the most popular by far).

This technology seems great at first glance but there are still a few kinks that seem to need working out before this technology hits the mainstream. First, and most importantly, how much of a battery hit will this card take from your camcorder or mobile phone? Anything more than just a sip of energy will result in the failure of this technology since power is such a precious resource for any gadget. Secondly, will the signal interfere with any other wireless devices in a person's home or office?

Lastly, how much more will a technology like this cost compared to a "regular" SD card. Flash memory is already expensive and adding more cost to it is very prohibitive to mainstream adoption. Even so, this technology could save yet another step in a shooter's workflow which is always welcomed. Not only do editors no longer have to wait in real-time for a tape to digitize it's content to the computer, they may be able to just get the footage a few seconds after the footage is shot.