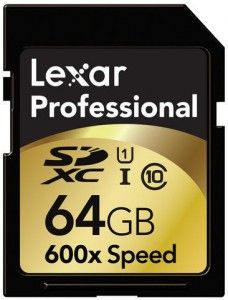 Much like the rest of the technology world, Lexar announced a bevy of new SD memory cards at CES today and the theme was speed. Lexar has managed to achieve speeds of up to 60MBps or 90MBps with their line of SD cards. This translates to much faster read and write times so that when you're done shooting it should take less than 15 minutes to dump an entire 64 GB card to your computer. Though it won't speed up your camera (most cameras don't require transfer speeds this high, the speed upgrade should help the card safely write sustained high definition data – something any shooter can appreciate.

The new cards from Lexar use its UHS-I interface for faster transfer speeds, but will still work in any SD card slot. Right now, their fastest speeds are found in their 64 GB card, which can acheive a 600X speed, but Lexar also announced a new 128 GB 400X speed card due in April. Though this is fast for SD cards, Lexar has CF cards that remain even faster than the 600X speeds that were just announced. Lexar's 128 GB CF card can hit speeds up to 100oX or 150MBps.

What remains to be seen is if these cards will come with the new WiFi standard set by the SD Association. If so, they may be a more valuable buy since many SD cards can break down rather quickly when placed in and out of a camera frequently. Another interesting point to consider is if the new wireless standard might also be faster than offloading a card via a USB, FireWire, or eSATA card reader. If so, that could make the speeds of these cards slightly less valuable. Though they would be helpful when recording to a large uncompressed video format.

The one nice part about these cards is that they are more than likely already capable of being used in 4K camcorders due to their large size and fast write speeds. If so, this may be a good card to think about adding to your growing video arsenal.