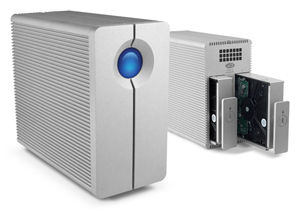 It appears there's no stopping the Thunderbolt train. Ever since it was announced back in February of 2011, the super-fast interface has quickly found its way to every Mac product (besides the Mac Pro) and several big name hard drives. Now, LaCie is hopping on the high-speed train with some exciting equipment of their own.

At CES 2012, LaCie revealed a 2big RAID that uses the new Thunderbolt technology. It come with hot-swappable disks for emergency hard drive failures, the ability to daisy-chain multiple drives (something that Apple and Intel have been touting about Thunderbolt for a while now), and of course, the solid aluminum build that we've all come to expect from a company like LaCie. The 2big RAID drive will come in flavors up to 8TB and will have sport an incredibly fast transfer rate of 311 MB/s, making this one sweet workhorse for video editing.

The drive will be available in the first quarter of 2012, but no pricing has yet been announced. What's even more interesting is that LaCie has also designed a new eSATA hub using Thunderbolt in order to hook up to 2 eSATA drives to a Thunderbolt interface at full eSATA speeds. In addition, the hub includes another Thunderbolt port for daisy-chaining making it possible to use up to 12 eSATA drives via a single Thunderbolt connection at the full 3GB/s speed.

Innovations like these make getting a Mac or PC (when they are available) with a Thunderbolt port a huge consideration when purchasing a computer, especially now that HD recording is the norm among video shooters. I can't tell you how many times I've wanted to hook up more than one eSATA drive to my computer when searching for an old project or just to be able to keep multiple hard drives connected to my computer for easy access. Now, with an adapter like this one from LaCie, it is more than possible to do.