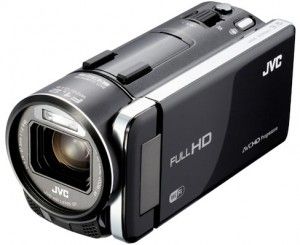 Here's another reason to put a smartphone on next year's Christmas list. JVC just announced an update to their Everio lineup with contains seven new models with 1080p recording that can be controlled by a smartphone via WiFi at CES. It wasn't too long ago that cameras were used to being controlled by an included remote control (that would invariably get lost), but now JVC is hoping you'll start using their camera's 802.11 b/g/n transmitter to wirelessly transfer video and stills to a smartphone for sharing to the internet.

The app for your phone will also include a way to monitor the video feed from your camcorder wirelessly along with controlling the geotagging of video and starting and stopping the recording. This will be a welcome update to JVC's camcorders but as everyone knows, the real magic comes in how good the image quality is. JVC has included the ability to capture at 1080p in UXP mode witha 24 Mbps sampling rate. The camera also comes with an incredibly good f1.2 lens and high speed and low speed recording for timelapses and slow motion footage.

The entire camcorder line will be available immediately and will range in price from $229.95 to $899.95.