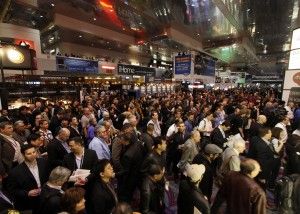 While we legally can't tell you some surprises yet, we can spill to you what we're excited to hear about at the International CES 2012. 4K and 3D are two great examples. 3D for what innovations show up this year since the general public has had substantial time to test out the video medium. Then there's the big buzz about 4K, which company will be first to really capture the general consumer, seems like the real catch here.

One of the two sides of this technology is the camera, and because Canon's announcement about such technology came more than two months prior to the International CES 2012 – the competition is on. The other part of 4K is the display, and manufacturers are hard at work improving these super-high resolution screens, our question is how low will we see a price drop and ultimately – will consumers adopt it?

Notable innovations in technology that we already have on our radar include flexible displays and alternative computer controls. While the projected time frame on these is beyond consumers of 2012, the International CES 2012 is a prime place for advancements to show up. Take a glance at the Consumer Electronics Association coverage of CES 2011 and you'll notice, there's a lot of people there. Our team is certain to make contact with some of the biggest names in video production, as well as learn something new about each other.

For some of us it'll be a brand new experience and hopefully we'll carry some of you (our audience) and yourexcitement with us. We'll be determining some awards for this specific event, so products that steal the spotlight may be recognized by us. Look to this blog for updates and our hints at the biggest news for video producers. As much as the city would love to make such exclusive information stay in Las Vegas forever, but our trip won't mean much to you unless we bring some stories back.