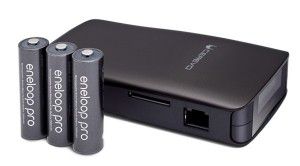 Contour and Cerevo USA have announced a partnership at CES 2012 for live video broadcasting for POV cameras. To put it in laymen's terms, this means that POV cameras like the Contour can now broadcast live to the internet via Ustream without the use of bulky HDMI cables. Their calling the broadcast unit "LiveShell" which is a battery powered wireless unit. A simple HDMI cable can connect the Contour camera to Cerevo's LiveShell which then broadcasts the content to the popular Ustream sharing site.

With the Contour+ (which we reviewed in our magazine) you can broadcast 1080p video at 30 frames per second or 720p video at 60 frames per second allowing internet viewers everywhere to see the world from the camera's perspective. The battery life on the Contour and LiveShell is rated for 3 hours meaning it will be able to keep ticking for the duration of the sport it's capturing. You can also configure the camera using your smartphone or a computer so that you don't have to hook up a cable to the camera in order to set the framing.

Of course, to make live broadcasting happen, the ski slopes your hitting will have to have WiFi access – something not every ski resort has. In this regard, it would be nice to see if they'll build a unit that can work with cellular reception as well as a WiFi connection in case your favorite place to do extreme sports is away from public places.

This announcement seems to come conspicuously close to being just in time for the 2012 Olympics in London and is just in time for the winter sporting season. We'll have to see if this proves to be a useful tools for broadcasters and for sporting events during the winter season but judging by how many GoPro's and Contours are already on the slopes of most ski resorts, this seems like an idea that will eventually catch on.