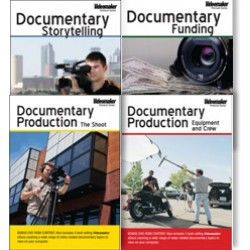 So you want to make a documentary? We've all heard that before. Just as we know that all the greatest writers are supposedly too busy hanging out in coffee shops and bemoaning the difficulties of writing to actually write, all the greatest documentarians are too busy worrying about where to start to actually, well, start. When I was a kid, I used to love watching nature documentaries on PBS, all about the ocean floor or the rain forest or, especially, dinosaurs. For years, though, I thought that a documentary HAD to be about some exotic faraway locale, that you had to travel to, say, the Gobi Desert or the Marianas trench, and that they always had to be about weird animals.

You might have the same problem, you're too convinced that documentaries have to be sprawling, complicated affairs to realize that they're actually pretty simple. All you have to do it break it down! Yup, it's simple if you just break down the documentary process. For example, take a look at Videomaker's premium documentary series, now available to buy as one complete set at a $60 discount. This DVD series divides up the daunting documentary process into four tidy little segments, so that you won't get too overwhelmed. All you need to worry about are four little things:

1) Documentary Storytelling: There's good fodder for a stellar documentary anywhere. Maybe you know a person with an unusual story to tell or maybe there's a local landmark that you've always been curious about. Some of the most compelling documentaries come from personal stories or family histories, or dramas that, in the grand scheme of things, might not really be that dramatic. The incidents might be small or mundane, but if they communicate bigger, universal themes, they can touch people in ways that more polished but less intimate documentaries fail to do. For example, "The King of Kong" is a documentary about one man's fight to become the world champion at the video game Donkey Kong. Most people would dismiss that as a silly goal, but the filmmakers were able to use his quest to tell a universal story about every man's desire to leave his mark on the world. This DVD shows you how to find the deeper meaning in even ordinary events and how to determine whether there's enough meat in a story to be worth your time as a documentarian.

2) Documentary Funding: Yeah, so we've already established that you don't have the budget to go down the Amazon. Unfortunately, even a modest documentary needs some budget and you don't want to be stuck spinning your wheels because you can't think of a way to get your hands on some cash. Well, before you resort to robbing a bank, pulling off a daring international diamond heist, or something equally drastic (Pro tip: Don't do that!), you should probably take a look at this DVD. Documentary Funding gives you helpful, practical and, above all, proven suggestions to get some cold hard cash to back up your documentary dreams. This feature looks at finding sources for funds, writing a thorough prospectus, knowing the details of an accurate budget sheet, organizing a successful fundraiser, editing a demo reel that impresses, and presenting the techniques of an effective pitch.

3) Documentary Equipment and Crew: Remember how we said you'd need money to shoot your documentary? Well, here's where that comes into play. You may be able to cajole some friends into helping you out and you may be able to borrow your neighbor's old camcorder for free… but let's face it. You know you get what you pay for when you rely on the kindness of strangers (and friends). If you're going to make a documentary, make it good. Cutting on necessary expenses always impacts the result and not in a good way. This DVD offers you tips on how to choose cameras, audio gear, lighting gear and accessories, and tips to finding and working with a professional crew. These tips will get you on your way to making a great documentary.

4) The Documentary Shoot: And now that you've got all that preliminary planning and pre-planning and pre-pre-planning out of the way, it's time to go out on the actual shoot. This is where it all counts. The shoot is probably the most fun part of making the documentary, because this is where you really get to see your vision come together. If you picked a good subject, you should feel re-newed excitement when you revisit the stories that originally sold you on it. Conducting insightful interviews, setting up good lighting and audio, and getting location access are all part of the process here!

So there you go, the entire documentary process, all in four easy-to-digest chunks. Now you better start filming, because, when you watch these DVDs, you'll no longer have the excuse that you don't know how to start.