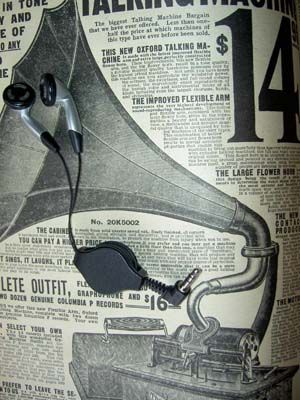 100 Years of Technology – What Will Video Look Like in 100 Years? From prehistoric cave drawings to modern video techniques, those of use who chose the life of visual historian and story-teller have had a lot of technical advances to keep abreast of. How does one manage it all for decades at a time? I am always amazed at how fast technology advancement moves nowadays. From someday working on transparent videos, like our associate Jackson Wong reported, to texture-touch TVs that associate Dan Bruns reported about, many of today's technical inventions now follow what is called Moore's Law, which states that the "number of transistors that can be placed inexpensively on an integrated circuit doubles approximately every two years". [Source:Wikipedia]

People used to keep their old TVs for a lifetime, then for a decade, now many of us upgrade every three years or so. Many more of us upgrade our mobile phones annually, whereas our grandparents kept their original black desktop 'anvil' hard-wired telephone their entire life. I was at a grade-school's annual Winter Concert last night and saw dozens of parents using a varied assortment of new and old devices to capture the moment: from a very old large clunky video camera that had only an eyepeice to tiny digital flash-drive camcorders, mobile phones, even an iPad.

Technology in the Past I love reading about the changes in technology, especially that which applies to cameras, editing and computers. Recently I wrote two blogs about technical history: The Birth of Film and History Now and Then and one of our readers, Roger Miller, brought me up to date on a story we wrote back in 1998 called "Video Time Machine: A Look Back to Life Before Camcorders". Roger was featured in that 13 year old story along with being a guest on our old TV series that aired on late night cable in the 1990s called "Videomaker Presents". These videos show early reactions of airlines and pedestrians and motorists to "this new thing" called home video. They also show early newscasts, equipment costs, and buying decisions with regard to home video. It's always fun to look back at those old archives!
http://www.youtube.com/watch?v=OLbCsqQI4cU
http://www.youtube.com/watch?v=8DEWnqRhfmM
Roger created his own production company in 1980, Advantage Video, and now solely produces wedding and events videos, working up to 5-camera shoots. His company also works at converting videos from all those old obsolete formats from Betamax to disc. He suggests this is a good business to get into, because where will today's families be when they want to future-protect their old family memories? Good idea. There are a few companies looking towards the future for archiving purposes, Primera Technology is partnering with Millennitia, to create discs that they claim will last 100 years. You might want to put a DVD player and wall-wart into that time capsule to play it from! Not to sit on just creating and archiving video, Miller has also been doing some technical inventing of his own, coming up with the SteadyIT for small camcorders.

The Future of Video? This look at the historical predictions for the future from Predictions TV , (albeit dated, since it only goes to 2009), is an interesting title-graphical look at technology from 100 years to 2009. From "will we survive the millennium bug?" (1999) to "will 640k be enough for anybody?" (1979) and "will computers eventually weigh less than a ton?" (1949) But even just 3 years later alothas happened since then. I love looking at old technology – and seeing how far we've come just in my lifetime. LAU BeirutsRiyad Nassar Library has a fantastic collection of technological historical artifacts. If I ever travel to the Middle East I'd just as likely want to see this amazing collection as I would ancient pyramids! I love this – Predictions of technology of 100 years ago, from Live Science. Other 100 years of technology a quick search came up with found that IBM has been around for a century and Computer Weekly takes a look at the future of technology in 100 years, and my favorite, a 100 year starship project.

What do you think? Where do you think we will be with computers in 100 years? How about capturing, editing and sharing videos a century from now? Let's hear your future predictions – the nice thing is, none of us will be around to see if you are right or wrong! (Unless, of course, the pharmaceutical companies invent that No Aging Pill by then!)