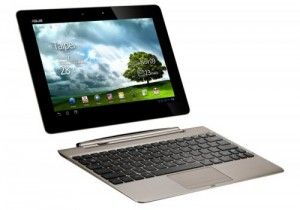 Ever since the iPad came out back in April 2010, tablets have been popping up faster than weeds in an untended garden. Companies from Motorola to HP quickly jumped into the fray hoping that consumers would pick their inexpensive devices over the already popular Apple offering. Though these tablets had a lot of welcome features such as a much bigger screen, longer battery life, and faster processors there was still something about them that made a good majority of the tech market think twice before buying. Namely, that the tablets were close to the size, cost, and functionality of laptops (or netbooks) but didn't have the memory and processing power, a real drawback for conducting processor-heavy business applications and complex gaming.

This is exactly what ASUS was intent on approaching with their Transformer tablet. The tablet, which will now be available on December 8th, is the first to have a quad core processor powered by NVIDIA's Tegra chip technology. The tablet also sports a 10.1 inch 1280×720 display made of Gorilla Glass, 1 GB of RAM, an 8-megapixel camera with LED flash, a microSD slot, and a mini-HDMI port. The battery is supposed to last for a crowd pleasing 12 hours and will have WiFi capabilities. In addition, it can be easily mounted to an optional keyboard with a trackpad making it easier to write e-mails and play certain kinds of games.

With all of the interesting features that this tablet includes, the question that invariably surfaces is why not make a tablet that is as powerful as most laptops? Though the specs on this device are top notch for tablets, they're actually quite slow compared to laptops. Considering laptops can be bought for as little as $300, it seems only a matter of time before tablet makers like ASUS not only make a device that has a processor as fast as the Intel i series with enough RAM to keep multiple programs open at a time, while having an operating system that not only works well for touch and gestures but for a mouse and keyboard as well.

This way, it would be possible to use the laptop for touch-based or keyboard-based control of all sorts of complex applications such as simple editing in Final Cut Pro or Premiere. It would also place the tablet in a great buying position as many consumers could use the device as a laptop replacement with the added weight and size benefits that a tablet has. Either way, it's good to see companies like ASUS release better and faster hardware. With the pace the tablet upgrades seem to be happening it could be just a few short years before we see something that can truly be a laptop replacement.