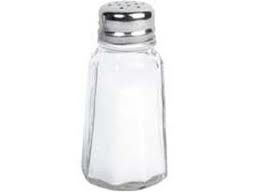 According to scientists in Singapore – simple table salt – the kind you use to make your cooking palatable may be the secret to making hard drives with six times the capacity of those we have now. The reason? Apparently, standard hard drives have randomly arranged magnetic grains on their surface that store data in a very inefficient way.

So instead, a team of scientists from Singapore decided to combine a salt solution to a high-resolution e-beam lithography process which ended up arranging the magnetic grains on the disc in a tighter fashion. As a comparison, most of today's hard drives have a memory density of .5 terabits per square inch using the randomly placed magnetic grains we talked about above.

Using their new process, however, the scientists were able to up the density to 3.3 terabits per square inch. This means that a 1 TB drive could end up holding 6 TB of data without adding any additional platters. The best part of this whole thing? The process is easily combined with current manufacturing technology meaning that it's likely to actually be available on the market.

No vaporware here! One has to wonder how much this will really mean for the future of hard drive technology with the advent of solid state drives. Solid state drives offer faster read and write speeds than any hard drive platter could hope to accomplish without spinning and stopping so fast that the platter would get damaged. However, hard disc based drives are still well-entrenched in the RAID market making this welcome news for those editing on multiple hard drives.

Imagine having a RAID enclosure that can hold 72 terabytes of data! It might finally be enough space to hold all of the projects you have…for now. Let's just keep hoping they make larger and faster SSD and HDD drives so that we have enough space when the 4K revolution begins!