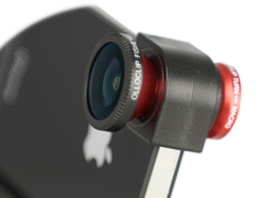 As the standard for smartphone cameras reaches 8MP, and is soon to go on up from there, the phenomenon of videos shot entirely on smartphones like the new iPhone 4S and the Samsung Galaxy S II is only going to expand in the coming years. The consumer and the prosumer market for full-featured camcorders and HDSLRs is certainly where serious videographers go, but it sure looks likely that smartphone video is here to stay.

Likewise, gadgets and accessories meant to enhance the shooting experience and the quality of video produced with these devices is a market segment that is scrambling to keep apace. Hardware designed to augment smartphone cameras has been around nearly as long as the phones themselves.

In the March, 2010 issue of Videomaker, we reviewed the Owle Bubo, a device designed for the iPhone and meant to enhance the stability of the smartphone as a video shooting camera. And devices like the Bubo are proliferating seemingly in lockstep with every new advance in smartphone camera technology.

Among the add-on accessories available to enhance smartphone video camera The Olloclip three-in-one lens adds the versatility of fish-eye and wide angle lenses to the iPhone. Similarly, the Kogeto Dot is a snap-on lens that together with a free app enables shooting 360 degree panoramic video. And for more in the iPhone lens category, Photojojo offers mounts that allow you to mount Cannon EOS or Nikon SLR lenses to the phone's camera.

Zacuto offers the Zgrip which is designed to provide some stability to the notoriously shaky video that comes from shooting with a flyweight and relatively delicate smartphone. Additionally, Gary Fong offers an iPhone tripod adapter, providing another option for bringing stability to the smartphone camera world. These are only a few of the products designed to help turn the tiny but capable cameras in today's smartphones into surprisingly competent video devices. For more on smartphone videography, read Jay Montana's article here.

The question for us, as always, is: what's next? As the cameras in these devices continue to improve will we see more videos proudly proclaiming to have been shot entirely on a smartphone. Or, perhaps more likely, will the smartphone, outfitted with some cool camera accessories, become a fine tool for an introduction to video before progressing to the big guns? In the end, you all will be the ones to decide.