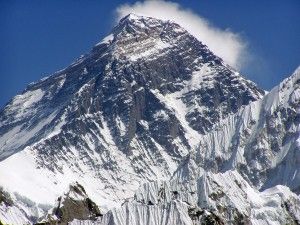 Mt. Everest. A perilous peak many have tried to scale but few have succeeded. Thousands of climbers have literally risked life and limb just to experience the thrill of seeing what the top of the world looks like. Now, decades after Edmund Hillary first scaled it, anyone can see what life is like at 29,000 feet by simply logging into a website from home.

Just this past week, a team of Nepalese scientists installed a high definition webcam on a mountain near Mount Everest in order to keep an eye on the famous peak. That means that as long as you can speak a little Italian or have a translator installed in your browser you can see what's happening on the opposite end of the globe by logging into the feed through the researcher's website.

Of course you may be asking how anyone could expect a camera placed in such extreme weather conditions could survive. Well, chalk one up to the ever-improving state of technology. Apparently, a company has been able to design a camera casing called the M12 Mobotix that not only allows the camera to withstand temperatures down to -22 degrees Fahrenheit or -30 Celsius, it also allows the camera to be charged by solar cells. The camera then transmits the image to a laboratory located in the K2 region of Mount Everest using wireless technology.

This is amazing considering how spotty the conditions can be in the Himalayas. All of this brings up an interesting question. If scientists are able to install a camera in such a dangerous place as the Himalayas, could we mount cameras to other interesting areas of the world as well? What about mounting a camera in the Great Barrier Reef or near the wreckage of the Titanic? In fact, with cameras already mounted on the International Space Station, what's stopping us from putting a camera on the moon? I'm sure there's many an issue to tackle before some of these feats can be accomplished but with this news from Mount Everest, it only seems like a matter of time.