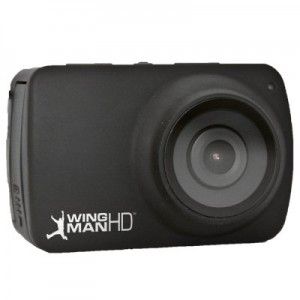 Delkin Devices announced on Thursday their intention to join in the POV camera foray with their device, the WingmanHD. The WingmanHD is a waterproof 3 ounce action camera that shoots 1080p high definition video and like most POV devices, can mount to almost any surface imaginable such as a skateboard, surfboard, bike, or helmet. Being just 3 ounces, Delkin is claiming that their device is the lightest POV camcorder on the market. A great claim to make, but with the already miniscule size of these kinds of camcorders, a slightly irrelevant one as well.

In addition, the camera comes with a "1/4-20" mount for putting the camera on tripods, the ability to switch between 1080p, 720p, and WVGA video as well as 8 megapixel stills. The company also thought to include autofocus, auto white balance, and auto exposure in the camera so that every video can look its best no matter what the condition.

Unfortunately, the camera does not have as wide of an angle of view as other popular POV cameras such as the GoPro Hero and Contour HD Plus have. While those cameras can achieve a 170 degree angle of view, the Delkin WingmanHD can only achieve 150 degrees. However, they are claiming that by keeping it at 150 degrees, their camera gives very little fish-eye distortion to an image.

The device does make up for its lack of viewing angle by including an impressive 1.5 inch built-in LCD display that allows users to skip, fast forward, rewind, and delete files on site. For those who like much larger monitors to view footage on, the camcorder does come with an HDMI, Composite A/V, and USB port. This is the first time an LCD monitor has been built right into a POV camera but isn't the only POV camcorder that will allow you to see your footage.

The GoPro Hero allows an LCD monitor to be attached to a port on the back of it's unit while the Contour HD Plus allows a mobile phone to preview the image from the camcorder using Bluetooth technology, something that would have been nice for the WingmanHD to have. Nonetheless, the camera shows real promise so long as the picture quality can also compare or best the other POV cameras in the market.

The WingmanHD is shipping now and will retail for a kit price of $249.99