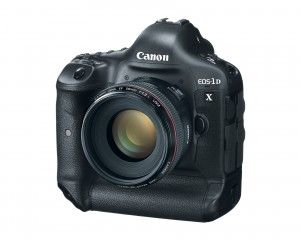 Canon just broke the news this morning on their newest camera to grace their EOS lineup: the Canon EOS-1D X. This is their first high-end camera designed with both video and stills in mind from the start and it's a doozy. In fact Canon is calling it a completely revolutionized EOS-1D series model. a high-speed multimedia juggernaut replacing both the EOS-1Ds Mark III and EOS-1D Mark IV models.

To call this camera a replacement of their old models means that this new camera has a lot to live up to. However, they've definitely seem to have accomplished that. The new model has an 18 megapixel sensor – smaller than the 1D Mark IV which this replaces – but with one big caveat: each pixel is 1.25 microns larger. This means that the camera can not only gather more light on each pixel, it can also do so without recording as much light bleed and noise.

On the processing side, Canon also saw fit to include 3 processors instead of the usual 2. It uses a dual DIGIC 5+ processor for image processing and a single DIGIC 4 processor just to achieve accurate auto exposure and focus. The new DIGIC 5+ technology means that the sensors now have almost 17 times more processing speed than their predecessor making it possible for the camera to process functions like chromatic abberation reduction, 12 fps continuous shooting, and HDR in real-time.

Also due to the addition of the DIGIC 4 processor, the camera now includes a 100,000-pixel RGB Metering Sensor that works together with the 1D's new EOS intelligent tracking and face recognition to give accurate focus tracking for live event video shooting. This means it may now finally be possible to keep your hands firmly on the tripod while shooting a wedding and not on the focus ring which can lead to shake. Of course, the mouth-watering details don't stop there. Canon is also including their newest Ultrasonic Wave Motion Cleaning feature to their camera which will help keep even smaller dust particles from ruining your images.

A big piece of news is that the camera will now be able to go lower than the standard ISO 100 into the ISO 50 range. This means you'll be able to capture even cleaner images than before if you have the light to spare in your scene. On the other hand, if you'll be shooting night scenes you'll be happy to know that you can crank your ISO up to an incredible 204,800 which will more than likely turn your video into one nice bit of colored confetti, but at least you'll see something! Speaking of seeing something, Canon's new DSLR is the first to include a Multiple Exposure capability. Due to the speed of the new processor, the camera is able to combine up to nine individual images into a single composite image without having to bring it into a computer.

We mentioned earlier how Canon not only thought about how their new camera could take beautiful still photos but how it could take video shots as well. Some of the new features the 1D-X includes are two new compression formats: intraframe (ALL-i), and interframe (IPG). This means that it should now be possible to edit these video files without having to buy a new computer or wait for minutes while your raw footage renders. Even more exciting than that, Canon also included the ability for the camera to record SMPTE-compliant timecode in either Record Run or Free Run mode, allowing multiple cameras and sound to be more easily synced in post-production.

Canon is also claiming that their new sensor will exhibit less moire than any previous model, which should come as welcome relief to anyone recording fine details in their images. To the relief of everyone, Canon has finally allowed their cameras to break the 4GB FAT format recording barrier with their new 1D X. This means you'll finally be able to split a movie file over multiple 4 GB files giving you a maximum recording time of 30 minutes. Though this isn't as good as mini-DV tape can do, it's at least better than the 10-12 minutes that was possible before. The 1D X will have similar frame rates to the previous 1D Mark IV with 24p, 25p, 30p; and 50p or 60p in 1280×720 mode. Finally, Canon has also given the camera a manual audio function that should help users capture decent quality audio with a wired mic.

Lastly, the camera has a new input for LAN connections. The connection features a gigabit Ethernet Jack capable of 1000BASE-T tranmission speeds which will give photographers a way to get their images to a computer quickly and safely. No word yet on whether or not this would work for video, but even if it doesn't, there's always some hope they may include it in a future update. This could be a really great way to allow these cameras to be used remotely for live video productions.

The EOS-1D X will be available in March 2012 and will go for $6,800 as a body-only configuration. A bit more expensive than it's predecessor, but worth it for some I'm sure!