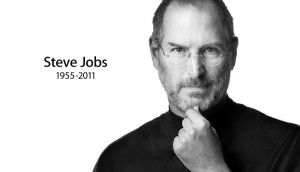 In a sad bit of news yesterday, it was reported that Steve Jobs, the driving force behind such companies as Apple and Pixar, died. The first to announce his death was his own company, which posted a picture of him on its website with a quote reading "Apple has lost a visionary and creative genius, and the world has lost an amazing human being.

Those of us who have been fortunate enough to know and work with Steve have lost a dear friend and an inspiring mentor." The website also offered a way to send condolences to Steve by emailing rememberingsteve@apple.com. The news comes just a day after Apple announced its new iPhone 4S and only a little more than a month after Jobs officially resigned. "I have always said if there ever came a day when I could no longer meet my duties and expectations as Apple's CEO, I would be the first to let you know," he wrote back in August. "Unfortunately, that day has come."

This is big news for Apple, which can attribute much of its success to Steve's vision and drive over the years. Ever since Jobs returned to the company as an "advisor" in 1996, he has been seen as the driving force behind a slew of products that helped turn the once-sluggish company around. So great was the change that for a brief time this year, it actually surpassed Exxon Mobil as the world's most valuable company.

That's a far cry from the state of the company in 1996. For those who may not know, Steve Jobs was also once the CEO of Pixar, having bought the company from the computer graphics division of George Lucas' ILM. At first, the company struggled to make a profit but when Pixar released "Toy Story," the first feature-length computer animated film, both it and the company became an overnight success. Eventually, media giants such as Disney took notice and bought the company for $7.5 billion, putting Jobs firmly back in the spotlight again.

Losing such an integral part of their company will undoubtedly increase pressure on Apple to deliver stunning software and devices in the next year. This is especially so with those in the video and graphics world. Ever since the introduction of Power Macs and Final Cut Pro in the early 2000's, Apple has enjoyed a commanding presence in the media market. The only question is if they can keep that momentum running.

Apple recently released a new version of Final Cut Pro at NAB which many critics lauded for a lack of the kinds of features that initially made it so successful. Answering the concerns of what they called their "vocal customers," Apple released an update to Final Cut Pro X that addressed some of the complaints about the program such as lack of XML importing and exporting. In addition, they released a demo version of the software for those who wanted to try the program without having to invest money up front.

This was a small move in the right direction, but without Steve to act as a "safety net" for the company's direction, many will have to wonder whether Apple's computers and software will continue to dominate the media market. It's too early to tell what this might mean for the company, but there's no doubt many in the media market will be keeping a close eye on what Tim Cook and Apple do next.