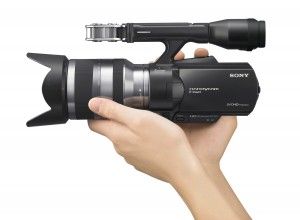 As all of us know, the world of technology is constantly changing. Of course, this is exactly why so many of us just can’t get enough of it. The same holds true for Sony’s latest announcement of their newest version of their ground-breaking interchangeable camera, the VG10 which Videomaker gave a Best Product of the Year award last year. The new camera will unsurprisingly be called the VG20 and has so many new features they might have well skipped the 20 and gone with the VG30 moniker instead.

First off, the camcorder has an upgraded sensor going from the VG10’s 14.2 megapixel Exmor APS HD to a new 16.1 megapixel Exmor R CMOS. As a result of this upgrade and an upgraded processor, Sony was able to include the ability to capture RAW stills. That’s right. RAW photographs have finally made their way to an affordable camcorder. That’s big news seeing as most camcorders just a few years ago could only take VGA resolution photos. Now if we could just get them to give us RAW video recording, we’d really be talking!

In addition, Sony has upgraded their audio capturing from stereo to 5.1 channel surround sound for those who find two channels of audio to be three channels too few. Sony has also found the time to introduce 4 new E-mount lenses, a 24mm F1.8, a 50mm F1.8 OSS, a 55-210mm F4.5-6.3 OSS lens and others still to be announced.

Of course, the camcorder will still be able to record 1920 x 1080 AVCHD video up to 24Mbps at either 24p, 30p, or 60p which makes it quite a versatile shooter. It will also be sporting a new grip and belt design, an updated 3 inch touch panel that can swivel up to 270 degrees, and additional record button at the top of the camera for convenience, and will finally be able to keep the LCD on during HDMI out. Unfortunately, the camcorder still lacks an XLR option. But this is something that is easily remedied with an external audio recorder such as a Zoom H4N.

Though there are quite a few features in Sony’s update to the VG10, the price has still managed to stay nicely low. Sony is offering the NEX-VG20 body for just $1,599 and the body plus an 18-200mm lens for $2,199 which allows this camera to compete with many of the popular DSLRs on the market today.