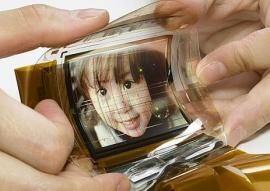 Imagine a world where a 42″ flat screen television can be folded and placed in your pocket, where curved panes of glass allow advertisements to follow you everywhere, and where a sheet as thin as a page of paper can be used as a touchscreen device. If Corning has anything to say about it, that day is coming – and sooner than you think. In fact, the glass-making company went so far as to release an entire video showing how these kinds of technologies will soon be affecting our lives. It’s pretty standardfare(with smiling people living all-too perfect, every-day lives) but does a good job of showing how a person’s life could be made better through a slew of flexible touchscreen devices. After watching these videos it may seem like the whole idea will be just a quick flash in the pan, but it’s not just Corning that sees this day fast approaching. Word has it that Sony is working on a portable folding OLED screen that is less than a millimeter thick, that LG is actually manufacturing flexible e-paper displays that are 19 inches across, and that Samsung has already created several flexible AMOLED displays that can withstand heat up to 400 degrees. With all of these companies investing so much into flexible displays, it’s obvious that they see this technology taking off.

Of course the question is how will this affect video? I know what you’re already thinking. We just got through updating our systems to edit in HD and now we have to design videos to play on a flexible surface? Yep. That pretty much sums it up if this technology ever really takes off – but it’s no reason to despair. Designing videos for flexible screens actually opens up a whole new world of possibilities. For example, if you had a screen that was bent into the shape of a ball, you could put a video of a spinning basketball or world globe inside. Flexible video surfaces would also make it possible to put moving ads in places that were once the territory of print. The inside of public transportation vehicles and domed ceilings could show video advertisements. Even windows on buildings could go from displaying the wonders of the great outdoors to the wonders of a new product. No matter what, all of these things could mean more paying jobs for all those involved in making video. Something almost any video enthusiast can rally around.