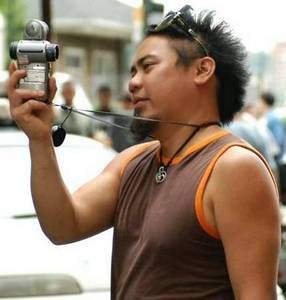 As the title suggests, the kind people at Nikon gave Videomaker a chance to speak with Matthew Libatique, the cinematographer for the award winning movies Black Swan and Iron Man, on the pros and cons of an HDSLR workflow. Matthew recently finished filming an entire commercial for Nikon using their newest D5100, so we figured he’d have an interesting insight into how much of a difference using an HDSLR makes over using his typical uber-expensive film gear.

Of course one of the first questions you have to ask someone who is used to having the best equipment that cinema has to offer, is why on earth they would use a camera like the D5100. Obviously, Nikon wanted to prove the camera’s ability to be used by Hollywood-grade cinematographers, but that still doesn’t explain why someone like Matthew Libatique would go through the headache of having to build an entirely new workflow just to prove filming with the 5100 could be done. “Well, I’ve always been a fan of Nikon,” Matt told us. “My father was a die-hard Nikon guy and so I grew up loving their products.” Then he quickly added, “I also accepted the project before I knew it would be on an HDSLR.” Though this explains a lot, the fact that Matt successfully made a professional commercial with an HDSLR camera does say a lot about how the industry has been changing.

As anyone who has shot on an HDSLR knows, getting a nice picture is no picnic. Matthew Libatique was no stranger to this on his shoot for Nikon. He mentioned that some of the biggest challenges he had when shooting on HDSLRs was how it handled motion and trying to get around moire. “I had to work around the fact that you can’t have certain patterns in the video or move the camera too fast,” he said. Also, he mentioned how it was tough to trust external monitors on the camera, “Exposure is definitely a big challenge. Without color bars, I stuck to referencing the monitor on the camera for exposure since I could never be sure about the external monitor.” Most importantly, he also found that due to the compression that HDSLRs are forced to put on the video there was, as he put it, “A lack of tonality in the image,” – something he rarely has to deal with when using high-end camcorders.

At the same time, there were many things about the camera that Matt really liked. “With these cameras you have a more cinematic depth of field,” he said. “I also like how if I get inspired, the camera is small and light enough that I can just go out and shoot.” Like many of us are already doing, Matt also mentioned how he plans to use HDSLRs for some short films and for capturing his daily life.

Of course, we couldn’t leave without asking Matt about his opinion the future of HDSLRs. “I think HDSLRs will see an advance in the way you hold them, will have more resolution, more ports, and definitely less compression. Right now the biggest issue is really processing.” Though we believe the body may take a while to change (except for an articulating screens), Matt makes a good point in hinting that HDSLRs need to improve on their compression. Who knows, with Hollywood-level cinematographers giving HDSLR companies suggestions on how to improve their cameras, we may see a lot of these issues go away in the future paving a way for cinematographers around the world to get a superb quality video at a great price.