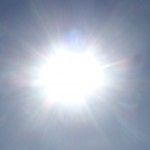 The sun can cast harsh shadows on faces when you're shooting outdoors, but this quick lighting tip can help you find a good angle for shooting on a sunny day.

Shooting outdoors, especially in the summer, can be miserable – the sun is hot, it's bright, it's very harsh and doesn't cooperate with diffusion. When you shoot people outdoors under the full noontime sun, their eyebrows and nose will cast shadows on their faces, making their eyes dark pits and giving a shadowed "mustache" above their upper lip. Most of us know this, but many people don't realize you can align the sun at an angle that is more flattering, without any special tricks, tools, or advanced lighting knowledge.

It's not always possible to avoid shooting outdoors at the worst time of day: noon to 2:00pm or so. I learned this from a reporter when I was shooting news, and it works. News shooters tend to be down-n-dirty run-n-gunners, and rarely have time to set up lights, use a tripod, or follow proper gear use, but we're usually the best at getting in and out of a situation while catching all the action. Sometimes, the reporters felt their presence took a back-seat to the event we were shooting, and they were right.

The majestic waterfall behind the reporter during her standup, or the burning building that the reporter wants in frame when we shoot his commentary are more important; and the standups still need to be shot, but some angles aren't flattering at all in natural light. Sometimes, you don't have a choice where the most flattering angle for your on-camera talent will be – you have to wing it.

So here's the tip I learned and have used it for framing subjects for video or still shots, and for framing myself, and it really makes a difference: Use your hand as a "barometer" to find the smoothest most flattering light for your skin. I'm going to lose dignity and use my own hands in these photos as examples.

[image:blog_post:13189]First: When you're outside in full daylight, hold your hand in the air a bit above your head and about a foot from your face and look at the skin on the back of your hand. [see the first photo at left] At the sun's harshest angle, you'll see wrinkles and cragginess at worst, and gorges and valleys from the knuckles and tendons at best.

[image:blog_post:13191] Next: Slowly rotate your entire body around, keeping the hand in the air, and watch the sun "play" across your hand. [See the second photo] On my 50+ year old hand, it looks grotesque at one angle where the sun shines down on it, but it can actually look almost smooth at another rotation. [see the third photo.] That exact spot where the skin looks the smoothest is the exact angle you need to have your subject's face angled, for the most flattering shot when you don't have access to lights, reflectors, diffusers, or shade.

The skin on the back of the hand is very thin, but quite pliable because we move our hands and fingers so much. Holding the hand up like this lets gravity pull the skin down some.

[image:blog_post:13190] Of course, as we age, well, you know, your hands can begin to look haggard, so the examples are good illustrations for trying to smooth the wrinkles that the harsh sun shows on someone's face. But wait, even on young people the gravity will pull this flexible surface down a bit when the hand is in the air and you can see a dimpling effect in harsh light as well as the slight creases that look shadowed along the knuckles.

[image:blog_post:13192] This next example is of a young child, and you can still see the difference between a hand with the sun bearing down at a harsh angle [4th photo] and a smoother looking less-minute detailed image. [5th photo]

[image:blog_post:13193] The idea is to find the best angle for your face, or your subject's face, and it doesn't mean ALWAYS having to have the person squinting into the full sun.

Consider your background, too. If the background is extremely bright, your camera's iris is going to want to close down, and if your subject is in partial or dappled shade with a bright background you're never going to get a good exposure for both. The best background outdoors would be dark, like with trees, but thats not always what you want. 'that awesome sunset teasing you! Try this trick next time you're outdoors

I can imagine hundreds of people holding their hands in the air right now, just to test my theory and let me know what you think.