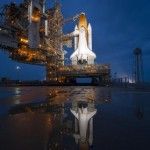 Were you one of the millions of people who watched the live broadcast online of the last shuttle launch of the NASA space program?

The Atlantis shuttle‘s last mission successfully launched at 11:29 Eastern time on Friday, July 8. About a minute before the launch, a Videomaker coworker sent us the live broadcast via U-Stream to watch and I was surprised at how quickly I was able to get the stream up and ready before the Atlantis launched into the atmosphere.

Cameras and camcorders – both pro and amateur – were set up all over the viewing area a few miles from the shuttles launch pad, and several were attached to the Atlantis shuttle itself; giving viewers an amazingly clean clear picture of the rockets as they fired up and of the launch, as well as the images broadcast from space. It still amazes me how technology can give us this view into outerspace its amazing what both the cameras and the method of distributing their signals can do, compared to just a few years ago.

I remember the cold sad day in January 1986 when the Space Shuttle Challenger blew up I was sitting in a TV stations edit room recording the live feed on a -inch videotape and logging various moments so I could quickly edit it down and compile a few bits of the event for the upcoming noon broadcast. The planned video was only going to run less than a minute right before the weathercast, and then boom the unthinkable happened. 73 seconds after the launch, before the eyes of hundreds of thousands of viewers watching on live TV worldwide, the Challenger exploded. Viewers werent sure if this was just the rockets routinely separating from the shuttle or something else.

What was different then compared to todays launch is you had to plan your day around the live event. If you worked or were in school at that time, you most likely had to wait until the evening news that night to find out what happened. When the Challenger exploded our switchboard lit up and we were inundated with frantic callers asking us to reassure us that the rumor they heard at work or in the grocery store was not true. Now, if you have a need to know; you just Google it.

Our newsroom was thrown into complete pandemonium back then. Today, viewers have instant access to live events at the drop of a hat and the network news stations are at a disadvantage they cant confirm rumors until they get official verification from a reputable source.

Although there were probably a lot less people watching todays launch on traditional broadcast TV, programs like U-Stream can have an instant exact count to how many computers are tuned in and U-Stream registered 4,825,869 views. And the those viewers were Twittering all over the planet through the U-Stream site so much, in fact, that it was impossible to read the short missives as they were posted.

Many wondered why they couldn’t “hear” the ship’s engine or “see” the movement. That’s the oddity of watching a fixed camera on moving objects. The objects appear to be stationary and the background is moving. Earlier this week, reader Skip Fredrick sent us a very cool video by videographer Jeremiah Warren of a DIY rocket launch with a small pen-sized spy-cam attached. Its very cool check it out.

You can still watch some live broadcast of the Shuttle Atlantis as it soars above the Earth on it’s final mission through the U-Stream link at: http://www.ustream.tv/