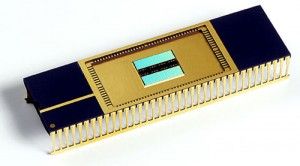 In a world where planes are constantly flying further and faster and where particles can be accelerated nearly to the speed of light, it’s no surprise that a new type of data storage has been proven to be faster than anything on the market. Scientists at UC San Diego performed an experiment that showed phase changing memory can beat some of the best off the shelf flash memory on the market. They were using a prototype phase changing module called Onyx made by Micron.

Of course this was only when writing small bits of data at a time. When doing so, the memory was able to achieve speeds that were 70 to 120 percent faster than its flash counterpart. When writing larger chunks of data, the drive was actually slower than flash memory. Nonetheless, the phase changing memory was faster at reading data of any size and placed a significantly smaller load on the CPU when used. Phase changing memory also has the added benefit of being able to write on demand without having to keep tables or logs like flash memory does.

Besides the uptick in speeds, the most fascinating part of phase changing memory is how it works. These chips work by storing data in a metal alloy called chalcogenide. In order to write memory, small bursts of heat switch sections of the material between its crystalline state or an amorphous arrangement that represent either a 0 or a 1. These 0s and 1s are then translated by the CPU into a digital file.

In practical terms, this increase in read times means that RAID drives and internal drives using this kind of memory should help editors save time when editing and rendering – especially in an era of large HD video file sizes. Also, this memory has been shown to have an average life of 100 million write cycles compared to a paltry 100,000 for NAND flash, meaning that these drives might be around just long enough to seem rather slow.