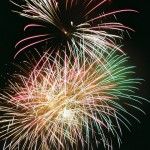 The 4th of July means barbecues, family gathering and fun in the sun, and the party concludes with the traditional pyro-show around the country. Everyone wants to capture the family fun, but when it comes to the Big Light Show in the Sky, shooting great firework footage is more than pointing the camera into the sky.

The less light you have, the harder it is to focus or capture an image that isn't underexposed or overly grainy. Throw in a fireworks scene that changes from dark to light within nanoseconds, and your camera will need a lot of help from its human counterpart.

So we have a few tips for you on shooting fireworks, and we'll start with the gear, then cover a few technical points, follow up with the setup and finally offer a few creative shooting techniques to make your 4th of July video memorable.

1 – Gear: A 3-chip camera captures images best, and fireworks in HD are awesome, but, with good shooting techniques, any camcorder can capture the show. The best camera is one with a large lens, which will let you capture the most light. The larger sensor will allow you to capture a good contrast in the darker scenes. Use a tripod, but set the drag loose to pan and swivel. A good smooth fluid-head tripod works the best.

2 – The Camera's Eye: Never shoot using auto focus or automatic exposure. In the dark, the auto iris opens wide, searching for light. When the fireworks flare, the shot is blown out before the iris can close. When the sky goes dark, your iris opens again, searching. Auto focus is also in constant motion, attempting to adjust. You don't want your images to blossom or flare too brightly, and auto iris will definitely do that.

3 – No Gain, No Grain: Practice the night before, if you can, using some "safe and sane" sparklers – which are legal in most areas that don't allow traditional home fireworks shows. Test your image with your iris on its smallest aperture (around f-8 or f-11). You might think you should open wide to get in more light, but the images wash out with bright fireworks. Try a Neutral Density (ND) filter or circular polarizer, too. If you "gain" your image from zero to 9db or 18db, your video becomes grainy, which flattens the fireworks' images and makes darker areas look reddish, not black. It seems counter-intuitive that you'd want to have an open iris in a darker scene, but you will lose color and will be left with a washed-out saturation if you shoot with the iris wide open.

4 – Get Focused : Landscape or Fireworks settings on some cameras can keep the camera from getting nutty, but manual will always always give you better control. Set your focus on infinity, if you have it. While it's still light, focus on a roof, a tree or a pole that's about where you think the fireworks might fill the sky. Never use auto focus; your camera will constantly be looking for something to focus on and you'll see a pulsing–what we call breathing, in your video while it searches for a focal point. If you're not sure of the focus, stay wide, it won't show the out-of-focus shot as badly as a closeup.

5 – Staging the Scene: Stay wide at first, until you get a feel of where the fireworks will land in the night sky. You don't know where the fireworks are going to fall at first, they might blow a bit to the side due to wind. Also, if there's a lot of smoke from the fireworks, and you're "down-wind" you might get too much smoke diffusing the color of the fireworks. Shoot people and fireworks separately. Don't shoot a burst of fireworks, then the people… then the fireworks… you will constantly have to reset your iris and focus, which is difficult at night. Shoot people first, when you still have some natural light. A twilight sky makes a beautiful beginning, especially if you use that polarizer.

6 – No Lights, Please: Unless you are shooting in an area like New York City where the Statue of Liberty and all the beautifully lit buildings are a part of the show, try to set your scene so that you don't have any background at all in the night sky. If you can, ask the pyro-expert beforehand where he thinks the blasts might go. Set up so you have no background lights at all, especially no moving lights like headlights. You'll want your black clean for editing later. Why? Because if you are going to do any cross-dissolving between fireworks, you will need that scene as blank as possible from anything except the fireworks.

[image:blog_post:13185] 7 – People: Low and Wide: Get in close to people and shoot wide. The closer you get, the more light you can bring in, and you can keep the iris small. Shoot a low angle, especially children, so they are looking up at the fireworks. Try to see if you can shoot them from the side or behind them, so that you can also capture a bit of the fireworks burst in the shot. If you angle it right, the faces are naturally lit by the fireworks reflection.

8 – Light Enhancement: Try framing dark subjects so there is a rim light behind them from a porch light or street light. Make sure it doesn't spill on their faces, as it will wash out the glow from the fireworks.

9 – Boom Boom: After capturing the people, move away to get better sound of the fireworks. You'll still hear the Ohhhs and Ahhhs from the crowd, but getting away from them gives you audible cues you want to listen for. You'll hear the boom as the fireworks are blasted from the cannon, a great audio clue that the flare is on its way. Once you've seen a few blasts, you can anticipate where they'll end by following the tracers.

OK. Now that you have the gear and setup down, lets talk techniques!

10 – In the Beginning: Stay wide at first to anticipate where the fireworks will land and keep them centered. Pay attention to the wind. If you're downwind, you might get smoke from the fireworks which can dilute your color.

11 – Shoot Long: If you're shooting with tape, a one-hour tape should be enough for most shows. Don't stop recording once a blast has finished until every sparkle has been extinguished, wait until your scene goes completely to black. This will give you a good clean "handle" for cross dissolving when you're editing all of this together later. Additionally, try to have each recording begin in black, before the blast fills the sky, so you have a clean "in-handle" for the cross dissolve. If you can, you should just let your entire recording roll continuously once the show begins. Even if you're shooting with tape, it's rare that a fireworks show lasts longer than an hour. Don't be afraid to waste your media, whether it's tape or a card, etc. If you've started fresh, you should be ok.

[image:blog_post:13186]12 – Zoom Zoom: Shooting for video is a lot more fun that still shooting. Unlike shooting stills, after you've shot a few bursts, you can experiment with movement. Zoom in to one blast, until it fills the screen, then let it to go black. Hold the focal point zoomed in for the next shot; hopefully that next blast will hit the sky in the same, or near the same, spot and fill the screen. Then zoom slowly out. This makes for fun cross-dissolving.

13- Place Image Here: Now do some more experimenting. Try framing your shot so that you shoot one scene with the blast landing in the lower left third of the screen. Then shoot another blast landing in the upper right third of the screen. Then you can make a cool cross dissolve. It looks like both bursts are in the scene at the same time, or that they are hitting the sky back to back instead of the usual 1-minute wait between bursts.

14 – Across the Universe: As I see a tracer beginning, I like to pan across the sky in hopes of capturing as I pan. Then I keep panning to black. Its just a different way to capture yet another blast in the sky.

15 – Editing and Finessing: Vary your editing so it's not boring. Start with a few people shots, then cut to a closeup of a face, as a flare flashes. This cutaway bridges the wide twilight shot with the darker nighttime shots. Then let one blast fill the screen. As it fades out, but is not fully black, dissolve your next shot in. I like to edit scenes in odd numbers: three blasts followed by a cutaway of someone enjoying the show. Then several more blasts, etc.

The Grand Finale is always your ending shot, perhaps with a closeup of the joyous look on a young child's face. Have fun!