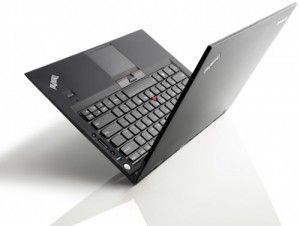 As anyone who’s ever owned a 4G cellphone knows, battery life means everything in gadgets. Especially in laptops, the lack of good battery life means you’ll constantly find yourself with a 5 pound paperweight every time you leave the house. Not to mention the fact that if you plan on needing to play HD footage or render footage you can also plan on having your battery die quicker than a mayfly. Enter the new Lenovo ThinkPad X1. With this model, Lenovo claims that you can charge its standard battery to 80% in just 30 minutes. This means that whether you kill your battery working on a project or just playing an epic game of Angry Birds on a plane, you should be able to have a fully charged battery by the time your layover has ended. This comes on the cusp of a few scientific breakthroughs in battery technology that we’ve reported on in an earlier blog post which makes us wonder if the technology has already gone into development or if Lenovo ended up making this breakthrough on their own.

Though that is amazing in and of itself, Lenovo has also announced that this laptop will also be ultraportable meaning that it is less than 17 millimeters thick and weighs in at 3.5 pounds – not a back breaker by any means. Lenovo has also found it convenient to include a 13.3 inch screen with Gorilla glass technology to protect the screen from scratches and cracks. Thanks to Intel, the X1 also sports their Wireless Display technology so wireless video can be streamed right from the laptop to a wireless-ready TV. Though there aren’t a lot of televisions that can handle that technology quite yet, it seems like it will just be a matter of time before this becomes fashionable. Who doesn’t want to eliminate the clutter of cables behind most TV’s?

The laptop comes with an Intel Core 15-2520M with 3MB of L3 cache and supports up to 8 GB of RAM. One of the coolest parts about this laptop and many others that are coming out is the option to get 160GB of SSD storage for fast start ups and read/write times. Of course that speed will definitely put a ding on your wallet, so you’ll have to decide just how badly you’ll need the speed. Overall, this laptop seems like a great machine for run-and-gun style editing though it’s no desktop replacement. Of course that’s not what you pay for in a laptop so if convenience and portability are a must for your productions, this could be the laptop for you. Lenovo has announced the price will start at US$1,399.