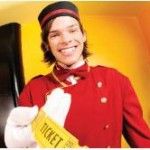 One of my favorite things about getting my hands on a new Hollywood release is the chance to check out the DVD Extras that some movies now come with. Especially now that many movies are released on Blu-ray, which can hold a lot more information and space than an ordinary DVD.

I love watching the Behind the Scenes footage (BTS), where they show the setup of some scenes. And the Director’s Commentary on most movies is very enlightening. After I’ve watched a movie from Open to End Credits, I watch it again with the commentary audio on.

If the comments are done by the director, sound person, director of photography or screenwriter, then there’s some good tidbits you can learn.

For instance, I was watching the original Star Wars trilogy, [yeah, we’ve had a lot of rain lately, so boredom does sink in!] but the “Bonus Disc” was stock full of BTS footage, setup, greenscreen, modeling, and comments on how they did it. The sound guys told a great story about getting the “right” sound for Darth Vadar’s footsteps from an old abandoned military bunker in San Francisco. You can read about some of it in our just uploaded Audio Column “Sound FX: Think Outside the Source”

Besides the bunkers, they talked about using ordinary dumpsters to get great “outer space” noise – jumping inside a dumpster and banging on the walls. The level of “Junk” in the bin changes the feeling of the sound. (Hum – I just got an image of Luke, Han, and Leia falling down that garbage shoot!)

In the Back to the Future movies, (again with the trilogies!) the director talks about how they got Michael J. Fox’s character in the third movie as an old time 1880s frontier man to hand over a baby to the 1980s Michael J. Fox character – both in a split scene at the same time – and the director used a quick “natural wipe” of Fox’s “mom” character passing through to bridge the gap. Really cool stuff.

Sometimes you learn how simple and easy a fix is, other times you realize how complex a problem solving issue was. In our recent Inspiring Directors feature, Director Ron Howard talks about how he had to work around location difficulties when filming Angels and Demons, his sequel to The da Vinci Code. Yup – even big time directors have to fight City Hall sometimes.

I’ve found that some audio commentaries are lacking in any substance, for instance recently I was watching a movie with the main actor doing the commentary, and he invited the head chef of the catering department to assist. Most of the talk was about the food or silliness on the set. I’ve found that usually if the commentary is done by an actor, there’s not a lot of “learning” , they’re somewhat narcissistic and mostly talk about themselves.

I recently bought the HUGE 6-disc Blu-ray collection of the making of Avatar and it looks like yet another late spring storm might be headed our way, so I’m planning to hunker in and watch more “how to make a movie” tips on some DVD extras. Have a nice 3-day weekend, everyone!