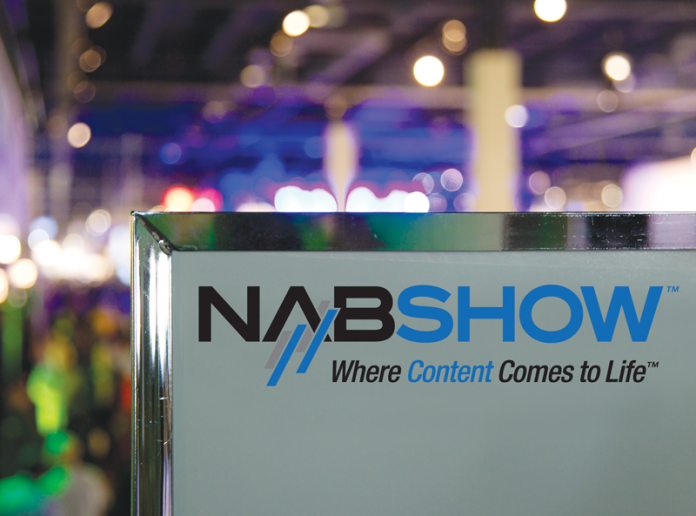 This last criteria was the hardest because at a show called the National Broadcasters Association, you're going to see a LOT of high-end products that are in use in television stations, movie studios, and big-time facilities. Also, since these are featured products from NAB, they are still most often going to be in the higher-end price range, even for our market, unlike the products we'll see at CES – the Consumer's Electronics Show.[image:blog_post:13239]

BEST IN SHOW: Sony NEX -FS100u – Camcorder with Interchangeable Lens. We picked this camera because it defines everything we believe is perfect for our community – a well-designed camcorder with interchangeable lenses, and a Super 35mm sensor giving us the chance to make incredible film-like depth of field, which is an ability that many camcorders lack without add-on accessories. Unlike most HDSLRs that have the same sensor size but a lack of pro features, the Sony NEX -FS100U has two XLR ports, a full HDMI-out for preview purposes, a large battery for long shoots, and the ability to record in 60 fps in 1080p mode. Of course, the thing that makes this product so great is the price: only $5,850 without a lens! [image:blog_post:13240]

BEST CAMCORDER: Canon XF305 – 3D Firmware Upgrade – the XF305 and the XF300, with this firmware upgrade, makes using two stellar camcorders side-by-side for 3D production easier. It features an OIS Lens Shift function that lines up the two camcorders optically to guarantee they are both on the same plane. These camcorders use the Canon XF codec to capture 50Mbps, 4:2:2 1080p video. The XF 305 will run about $8000 and the XF300 will be $6,700. These camcorders were great already and with the new 3D feature, they should be even more popular than ever. [image:blog_post:13241]

BEST COMPUTER: HP EliteBook 8760w – The 876ow has a 17.3-inch diagonal HD Dreamcolor screen, a choice of AMD FirePro or Nvidia Quadro graphics cards and up to 4GB of memory. The laptop will also have the ability to be configured with three hard drives and RAID 5 support. Best of all, the laptop can come with HP's high end Dreamcolor display for superior color accuracy. This is one of three EliteBooks announced, and all three have aluminum alloy hinges and cast titanium latches – they're built rugged. The three EliteBook laptops and two Z-series desktops HP showed off at NAB 2011 will be available around May of this year. The prices for the Elitebooks are $1,299, $1,349 and $1,899 respectively. [image:blog_post:13242]

BEST EDITING SOFTWARE: Apple Final Cut Pro X – Unlike Adobe and Avid, Apple hasn't released a new version to its Final Cut Pro editing software in quite some time, and this announcement knocked the socks off of many of those in attendance. The big news was that Apple is dropping its "entry level" Final Cut Express for simply Final Cut Pro, and the price will be an amazing $300 for the program. With a price like this, advanced editing just moved into the intermediate and prosumer world. The price wasn't the only thing eye-popping. The interface also featured a complete design rewrite. Final Cut Pro X ['X' is for version 10] promises to be a 64-bit scalable application with background rendering, will include a "magnetic timeline", an updated GUI, and has many real-time effects. It will be available in June of this year. [image:blog_post:13243]

BEST CAMERA SUPPORT: Redrock micro3D Rig – Redrock has been the leader in many production accessories and the micro3D rig is no exception. This side-by-side rig is designed for 3D capable, smaller format cameras like Canon's XF100. In addition to the two base plate mounts, the rig includes X, Y, Z adjustable calibration, the ability to set convergence and interaxial distance easily and precisely with the engraved millimeter measurements, and comes with an 18-inch bar or the option to upgrade to a 36-inch bar. [image:blog_post:13244]

BEST LIGHT GEAR: Lowel Studio LED 250 and 450 – These LED Light banks are a first for Lowel, and we're happy to see affordable LED lighting for our market. The lights are DMX dimmable and controllable, have a Color Rendering Index of 91+ making them more accurate across the spectrum, and have a quiet fanless operation. They are available in daylight and tungsten color, and include barn-doors, honeycomb grids and diffusers. [image:blog_post:13246]

BEST MICROPHONE: Sennheiser MKH 8060 – Shotgun Mic – Audio is just as important as video in a production, and if you low-ball your mic purchase, well, you get what you pay for. Losing the audio or relying on the in-camera microphone has ruined many a potentially fine piece, so we were glad to check out the Sennheiser MKH 8060 shotgun mic. This is Sennheiser's first short shotgun-style microphone. It has the ability to change from an analog output to a digital output which should be a breath of fresh air to any audio engineer. The microphone will run about $2,000, which might seem a lot of cash now, but it will last you a lifetime – much longer than that camcorder you're using it with, and the next.. and the next.. and the next… [image:blog_post:13247]

BEST MONITOR: iKan VX7e – Field Monitor – Yes, there were LOTS of monitors at this show – especially mega-big 3D monitors, but we liked the compact iKan VX7e field monitor which introduces Peaking and False Color features to iKans VX series of HD monitors. The VX7e is equipped with both Monochrome and Color Peaking features which highlight sharp lines and stark contrasts for optimal focus control. [image:blog_post:13248]

BEST STOCK MEDIA: SmartSound SonicFire Pro Quicktracks – Cloud-based Royalty-Free Music Creation Service – Ever since YouTube came on the stage, video producers have been finding out what we've been talking about for years – you can't steal other people creations and use them without remuneration – meaning, you have to pay for the privilege of using someone's work. SmartSound makes music creation software that even the tone-deaf video producer can use – easily, efficiently and creatively. You simply find the "mood" and style of music you want, makes some adjustments that include adding vocals and instruments, decide how long you want it, and create – SonicFire Pro does the hard part. But now, with SmartSound SonicFire Pro Quicktracks, you don't have to own the entire library, or take us too much space on your drive, you make your creations in the cloud, then insert it into your timeline. Custom soundtracks are royalty free; pre-purchased album coupons are available. [image:blog_post:13249]

BEST PLUG-IN: Boris FX Boris Red 5 – Boris FX Red has long been known as an efficient and professional effects editing program and you can purchase it as a stand-alone program if it hasn't been bundled in an editing program you use. They changed the user interface for Boris Red 5 to make it similar to other programs, and it easily works in conjunction with Apple's Final Cut and Motion, Adobe's After Effects and Premiere Pro, Avid's editing and DS systems, Media 100, Sony Vegas Pro, Grass Valley Edius and a host of other editing programs. The program works with either ATI or NVIDIA cards and the interface is completely customizable. With 64-bit processing, 3-way color grade filtering, noise reduction filters, pixel fixer filter, UpRez filters and many more fixes and effects, this powerful tool is definitely worth a look. [image:blog_post:13250]

MOST INNOVATIVE: PhotonSpot Nova 270 – The show was eye-candy for sure, and as much as we liked looking at these products, we tried [really – we tried!] to stay focused on Videomaker community needs. But, OK – let's face it – readers of Car & Driver magazine might not ever have the chance to get behind the newest Maserati, but they DO like reading about it! So we also looked at a few new-technology of higher-end products, knowing that, eventually, their design and features might trickle down to our reach. Case in point – the one product that has no price, but will be higher than we'd want to spend – today – might eventually become affordable to the average producer, and we gave it a "Best Innovative Product" awards because it truly is innovative and never been done before. That is the PhotonSpot Nova 270 light form PhotonBeard, which is a lamp Peter Daffarn and his designers created using light emitting plasma – LEP. This lamp was tiny in size but had an incredible throw due to the fresnel lens and its ability to deliver 14,000 lumens of light. It was practically cool to the touch, and could last up to ten years before burning out. This is the first "new" design in lighting technology for video production since the introduction of LEDs, and we hope it will be available and affordable for all video producers someday. Although this was out of the average video producers' price range, we believe it to be truly innovative in its design. Now that most of our blisters have healed and our debate is finished, we look forward to the next showcase – and the next – to give you an idea of the products out there that you'll be using in the very near future.