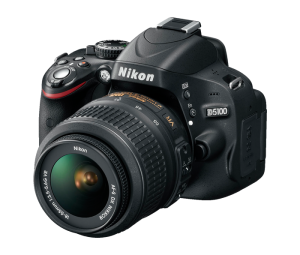 NAB is just around the corner and companies are gearing up to announce some of their most innovative products of the year. Of course, some companies get a bit itchy and can’t wait to share what’s in store. Such is the case with Nikon. Nikon got an early start by announcing their exciting new HDSLR, the D5100. The camera, which costs only $899.95 with an 18-55mm VR lens, can shoot in full 1080p HD at 30 and 24 frames per second, in 720p at 30 and 24 fps (sadly, no 60fps option), and in 640×424 at 24 fps. It also records to the ever popular H.264/MPEG-4 file format and has a 16.2 megapixel 23.6 x 15.6mm sensor for low noise and shallow depth of field recording. The camera has a slot for recording on SD, SDHC, or SDXC memory cards – which have become increasingly popular with cameras and camcorders alike due totheirfast file transfers and inexpensive price.

One of the most exciting features of their new camera is the 3 inch articulating screen. With it, both high and low angle shots should be much easier to take and with the ability to rotate 180 degrees, the screen has a natural protection when placed up against the back of the camera. This puts Nikon in the same camp as Canon’s 60D and Sony’s Alpha, a trend which will hopefully only continue. Much like the Sony Alpha cameras, the Nikon D5100 also has the ability to autofocus during shooting, making camera operation simple for those doing quick, run and gun style shots.

At the same time, Nikon has also announced their new Nikon ME-1 stereo microphone. This microphone comes with a low-cut filter to reduce wind noise and has a cable stop to hold the 3.5mm stereo mini-pin in place for noise reduction. This microphone comes as a response to many users complaints about loud autofocus and handling noise using previous cameras internal microphones. The condenser microphone will be unidirectional, has a 60 dB signal-to-noise ratio, and is supplied power by the camera.

[image:blog_post:13269]With the release of this camera, Nikon seems to be taking even bigger strides towards making a camera that fits almost every amateur and prosumer videographer’s needs. Though it still has a way to go, the improvements to their latest camera is encouraging. Here’s to hoping that the next release to the D3S has 1080p recording at 60 fps, a 50 Mb/s or 28 Mb/s AVCHD recording format, an XLR input, manual audio controls, and dual SD continuous shooting option. Of course that may never happen unless Nikon releases a camcorder but it never hurt to be optimistic!