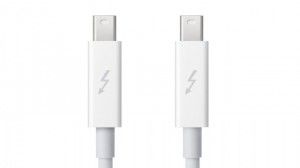 For many people, the wait is finally over. On Thursday, Apple and Intel just released the much anticipated Thunderbolt I/O technology that supports high-resolution displays and high-performance data devices through a single, compact port that can transfer data at up to 10 Gb/s.

Previous to the announcement, rumors had been flying about a big announcement involving Apple and Intel. Most analysts had correctly predicted that it would have something to do with Light Peak, a codename given to Intel’s research project to find a faster connection using a combination of fiber optics for data transfers and copper wire for power. However, things changed when in early 2011, Intel developers announced that Light Peak technology would use only copper wires. This announcement disappointed some who felt that the move would slow down the transfer rate of the cable, but when Apple ended up announcing the Thunderbolt technology in their Macbook Pros couldachievespeeds up to 10 Gb/s, most of their fears were eased.

The reason why this technology is so exciting is that it is at least twice as fast as any other I/O alternative out there, including the recently released USB 3.0. In comparison, USB 2.0 can only achieve 480 Mb/s, eSATA only 3 Gb/s, and USB 3.0 up to 5 Gb/s. What this means is that cable transfer technology could finally outpace the speed of even the fastest of drives like a RAIDed SSD. With this technology, you play back two 1920×1080 signals from a drive equipped with Thunderbolt technology without any dropped frames at all. According to Intel, you can even transfer a full-length HD movie in less than 30 seconds, and backup a year of continuous MP3 playback in just over 10 minutes. Impressive.

Quite honestly, anything that speeds up the process of editing is a welcome addition to my workflow, so I’m really excited about this technology. Even so, here’s hoping that in the future, they’ll develop something that can transfer data as fast asthe PCI Express slot in PCs do at 32 Gb/s. Until then, I’ll be making sure that my next laptop has both Thunderbolt technology and a USB 3.0 port.