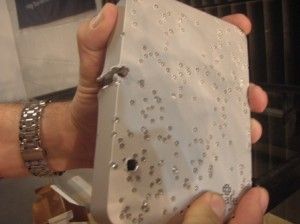 2,700 companies with more than 20-thousand products were on display at this year's International Consumer Electronics Show (CES) in Las Vegas, and the Videomaker staffers had a hard time narrowing down their focus. This year's show had a record 140-thousand attendees, which proves good for the economy, but difficult for personal navigation.

[image:blog_post:13327] Videomaker editors Dan, Scott and I, along with sales staff Isaac and Terra and our CEO and founder, Matt York, all braced ourselves for the battle while Susan, Julie and Derek held the fort at home. Julie, Derek and our intern Jackson, have been feeding you news when available, and you'll be reading about more in the upcoming weeks.

But for today, our first day back in the office and still reeling from the trip, I'll provide you with a bit of color cometary and share some of the fun before we get into too much serious stuff. Sure that I was an inch taller than when I started the week due to blisters and callouses, I approached my last meeting of the event with trepidation. I received a vague text message to meet some guys in the back of the convention center for a ride to a "demo." 5 other journalists and I were taken to a gun range for the demo – a test to see if we could destroy a rugged portable hard drive. And we did try.

[image:blog_post:13328]Robb Moore, founder of ioSafe, had a message he wanted to share with anyone who uses a computer for important data – back it up. And protect it. Moore designed his products to do just that – protect your data, regardless of water, fire, major catastrophes and clumsy people. Last year, Moore showed off the ioSafe SoloPRO desktop drive, a tough-as-you-can-get drive sealed in a steel case. (Read Videomaker's Reveiw of the ioSafe SoloPRO.) Moore threw the SoloPRO in a fire pit, dropped it from an extreme height and drove over it with a tractor – all to prove a point that these drives can take a beating. (See BBC's report here.)

In this year's demo, the drive in question is a small portable drive of the kind video producers might take on location. Due to its weight, the drive, in ioSafe's Rugged Portable line, can't take extreme fire conditions like the SoloPRO, but that's not its purpose. It's made to go in the field and work in the field and survive in the field despite clumsy videographers carrying enough gear to challange a pack-mule, who also shoot in all sorts of climate and conditions while still trying to maintain good footage.

[image:blog_post:13329]Fun and games aside, the purpose of the demo was to show that the drive is very rugged, and can stand up to nearly anything. Since it's a portable drive that is perfect for the on-the-go video-shooter, (no pun intended), it needs to be tough, and to withstands the little drops and 'oops' we throw at gear in the field.

Moore took a few photos of our gathering at the American Shooters Range with Jerry spotting for safety, then loaded the photos onto the drive. He then first demo'ed the drive's water-tight ability by dunking it in a water-filled fish-tank, then after drying it off with alcohol and canned gas, he plugged it into a laptop and the data was still good.

Then he aimed a shotgun at the drive, hanging 30 feet away, and plastered it with pellet craters, and the drive still produced data. [image:blog_post:13331]

Shooting it once was kind of interesting, but he then let the journalists have their hand at trying to destroy the device. One by one 5 guys and I shot at the drive, and it continued to stay tough and the data safe.

Finally, we all opened fire on the drive with an M16 machine gun. Chris Foreman, of ars technica clipped it, breaking the drive apart. The drive finally met its match and wouldn't load up, [image:blog_post:13332]

but Moore did some on-site data recovery, and lo and behold, the data was still intact.

After that, the rest of us got to shoot the machine gun at the drive, and I drilled it -[image:blog_post:13335] yes, that hole was done by me, Jennifer A.K.A. Annie Oakley.

Of course, more than one M16 shot at the drive is probably going to destroy it, but no one plans to go to these extremes to damage a hard drive.

So, why the theatrics? Because we've all done it – moved or deleted files stupidly, or had a drive fail unexpectedly, and now that camcorders aren't shooting to videotape but to drives and cards, somewhere someday, that data might disappear unless it's backed up.

ioSafe has backup plans that promise a 99% chance of recovery, and when recovery goes to extreme measures, this can cost you in the thousands. And that's nothing to joke about. Check out the reports of Chris Foreman of ars technica, Steven Mostyn with The Tech Herald and Nick Barber of IDG News Service.

They are quite fun and entertaining. I had a simple point-n-shoot camera with me and wasn't able to collect the best footage. After all, when you're told you're going out into the desert in a long low black car with darkened windows accompanied by 7 men, you don't want to lug a bunch of gear around, just in case you need to high-tail it out of there in a hurry! On the other hand, that "drive" proved to be a very interesting story. Watch for more product reports and stories from the 2011 CES show all week.