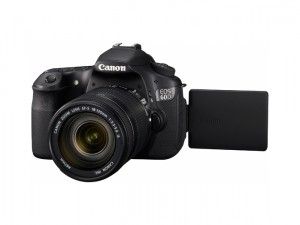 Just a few weeks ago, Videomaker had the privilege of sending a member of it’s staff to Yellowstone national park with the exciting promise of being able to get our hands on one of Canon’s newest releases. What we saw when we arrived was Canon’s completely redesigned 60D. With 1920×1080 video resolution plus an articulating LCD screen, this camera immediately drew our undivided attention. The first place we were able to put the camera to use was on an exciting gondola ride up into the Grand Teton mountains. On our way up to the top, the Canon representative told us all about the camera such as how it has an upgraded sensor that can capture 18 megapixel pictures, a built-in flash, records on SDXC cards, and best of all has a manual feature for controlling audio. That means that even though this camera still can’t compete with the EOS 1D and 7D for picture quality, when it comes to audio, has everything but the 5D Mark ii beat.

When we finally reached the top of the Grand Tetons, I was happy to see that the camera was very simple to use as it resembles every other Canon camera’s buttons and designs very closely. The camera was also very durable and lightweight – two things that matter a lot in location shooting. When we next went to a waterfall in Yellowstone, we were happy to have a number of different frame rates for shooting video. The 60D allows for 30, 25, and 24 in full HD, and 60, 50, 30, 25, and 24 in 720p. Moving water looked really nice in 720p60 and the HDR bracket shooting allowed for some really nice separation between the waterfall and the sky. Even so, as with all cameras with CMOS sensors, there was still some rolling shutter issues to deal with which became very apparent when capturing a strolling black bear with an 800 millimeter lens. As enthralling as it was to capture a black bear on film, almost all of the footage was unusable. Of course to Canon’s credit if we would have captured the video using a fluid head tripod rather than a ball head, there’s no doubt the footage would have looked a lot better. As it was, the articulating screen helped out immensely for getting shots from all angles and allowed us to capture great video of the wildlife at Yellowstone park. Honestly, after using this camera with its articulating lcd screen, it’s hard to believe that this won’t become a standard in Canon’s entire line of cameras. To see how this camera performed as well as the beauty of Yellowstone make sure to take a look at the pictures after the break or the video below.