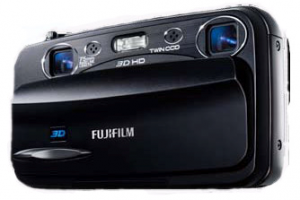 When camera technology is still relatively fresh, nobody really expects manufacturers to put out a solid product in one of their first releases. That’s why Fujifilm’s newly announced W3 3D HD camera is a particularly pleasant surprise. With its 10 megapixel and 1/2.3 inch sensor, its 720p 3D video capabilities, and glasses-free LCD screen, Fujifilm has managed to set the bar higher than anyone thought it would be this early in the 3D game.

As expected, the camera has 2 lenses recording images on 2 sensors simultaneously, making 3D images and video possible. The unexpected part however is how Fujifilm managed to use those lenses for 2D photography. When in 2D mode, the W3 can use both lenses to take different shots simultaneously. The cool part is that this will allow photographers to shoot both close-up and wide angle versions of a photo or to shoot two images with different iris values, allowing photographers to capture HDR images. As for the video side of the camera, the FinePix W3 has stereo sound recording, a 1280×720 pixel resolution, shoots at 24 frames per second on an SD card, is NTSC and PAL switchable, has an HDMI out for 3D capable TVs and best of all, has a 3D lenticular display allowing you to view your images and video in 3D without wearing an awkward pair of glasses. Of all the features, the lenticular lens is a real breakthrough for 3D cameras. With this technology, videographers will not have to keep taking their glasses on and off in order to switch between monitoring their footage and looking at their controls. If all 3D camera and camcorder companies started offering their products with glasses-free displays, it would no doubt be a huge leap forward in getting these products off the shelves.

With that said, Fujifilm’s camera does have a few faults that are worth mentioning. First, lenticular displays are still not completely fool-proof. If you try to play back your captured footage while looking at the screen from the side, the illusion of 3D will quickly break down. Also, the camera only records in the partially defunct 1280×720 resolution which will not look as good on a full 3D HD display. These issues aside, Fujifilm has definitely set the bar high on what customers will expect from 3D camcorders and cameras in the future. If companies can improve on what Fujifilm has started, we may yet see 3D become a mainstay in both the theaters and at home.