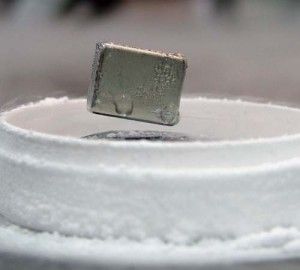 As every videographer knows, battery life on cameras are often woefully short. I mean, how many times have you had an unforgettable moment happen at an event but couldn’t capture it due to a low or dead battery? In the same spirit, how often have you had your cell phone die in the middle of an incredibly important conversation to a loved one or coworker? These are all situations that happen far too often due to the limitations of battery life in the world today. The unfortunate fact is that scientists just can’t fit a lot of power into a small device especially with the materials that have been discovered thus far.

Not so anymore. Not if the scientists at Washington State have anything to say about it. These scientists realized that by crushing the chemical xenon difluoride to a pressure 1 million times that of our atmosphere, it turns the chemical into a super powerful long lasting battery. Just how they figured out that information, we’ll never know. The idea is that all of the energy used to crush the substance can be stored in it’s chemical bonds for later use, making this battery ultra compact and ultra powerful. Apparently, the only way to apply 1 million atmospheres of pressure to this substance is by placing it between two diamond anvils allowing the shiny square metal battery you see in the photo to be created in its place. The coolest part of all is that after this process is over, it produces a substance that has become the undisputed ultra compact energy storage champion.

Unfortunately, this battery is not yet available to the public but when it is, it’s not hard to imagine that every kind of device manufacturer will be crawling over each other to get it. I mean if this thing is more efficient at storing energy than any other device in the world, why wouldn’t companies try and use it to power their equipment for a longer period of time? That’s just silliness is what that is. I know that I would love to be shooting for 8 continuous hours without ever having to swap the battery on either my external field monitor or my camera while on a shoot. If this is what this battery could do, it would allow for a leaner field shooting setup and along with it, less frustration. As a result of this, I think it’s appropriate to say that I am hoping this technology along with HD Base T and Light Peak gets adopted soon. With these products, there finally might be virtually no limits to what our cameras can do.