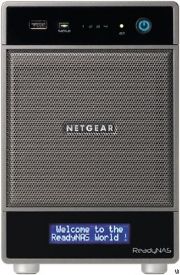 Netgear’s ReadyNAS is a new line of home storage devices that have a couple new features that could bring network storage to the masses. The ReadyNAS has the standard features you would expect from a network storage device, which includesredundancyand up to 12 terabytes of capacity. WhatseparatesReadyNAS from all the other devices on the market is two different partnerships with Orb and TiVo plus new Intel Atom processors. The partnership with Orb allows files to be streamed to multiple mobile devices like iPads, Blackberry phones, and Android devices while TiVo’s partnership allows the user to store thousands of hours of television content. This is Netgears first system to include a PC chip inside it’s consumer products which allows the devices to run up to three times faster!

Netgear hopes these new features will make network attached devices something people willactuallyget excited about. Grab whatever content needed anytime, in or out of the house via the web or a mobile applicationwhetherit be music libraries, movie collections, home movies or thousands of hours of television.