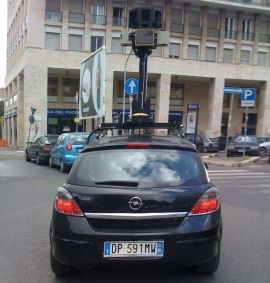 Almost everyone is familiar with the Street View selection on Google Maps: type in your own address in the Google map, select the Street View, and see a fairly clear view of your home that you can twist and tweak and rotate to see the rest of your neighborhood. Kinda cool – kinda creepy. A while back, Google admitted that while the Google Camera Cars were photographing your neighborhood, it may also have been scouring your airwaves collecting information on unsecured Wi-Fi network activity. Oops.

According to a Cnet report in May 2010, Google authorities admitted a month earlier to collecting the publicly broadcast information while using the Street View cars, but that it didn't "collect payload data".  But they later recanted and were singing a different tune.

"It's now clear that we have been mistakenly collecting samples of payload data from open (i.e. non-password-protected) Wi-Fi networks, even though we never used that data in any Google products," Alan Eustace, senior vice president for engineering and research, wrote in the blog post. He further stated: "However, we will typically have collected only fragments of payload data because: our cars are on the move; someone would need to be using the network as a car passed by; and our in-car WiFi equipment automatically changes channels roughly five times a second. In addition, we did not collect information traveling over secure, password-protected WiFi networks."

Apparently the mistake has been going on for several years,and had just then come to light. Lawsuits are now going on in Germany, Spain and Italy as well as in the U.S and Australia. An Oregon couple filed a class action suit against Google, Ireland called Google to pull down it's street view and Cnet reports that Australia has entered the fray and is now in contention with the Street View ditty, claiming it is a violation of Australia's telecommunications act.

We in the United States have known about this Big Brother phenomenon for almost two decades: we were the first to be subjected to traffic cameras in intersections that recorded our lapses of good driving moments. SNAP – a photo is taken of our car in three angles – proving who is driving, when the violation occurred and what the car plate reads.

Almost a year ago, we made a blog post about the irony of George Orwell's predictions for the future. In 1949, Orwell wrote in his book, Nineteen Eighty-Four, that we'll be living in a society that has no privacy, that our every move will be watched, that we will be living in "a world of perpetual war, pervasive government surveillance, public mind control, and the voiding of citizens' rights." [image:blog_post:13504]

Today the irony of Orwell's predictions is that his neighborhood is surrounded by 32 security cameras that can look down on his home, which is now a national landmark in London.

Nowadays, it's nearly impossible to hide away from cameras and the technology that has allowed their clarity and ease of use to be used in all sorts of situations. Cameras are all around us and we dance along the blade of a double-edged sword.

As this report was written, just this week, security footage from Lima, Peru helped catch a Dutch citizen hiding in Chile following a murder he was accused of in Peru and who also happened to also be accused of the murder of a U.S. teen in the Caribbean. Joran van der Sloot, prime suspect in the murder of Alabama teen Natalee Holloway 5 years ago, was found in Chile after images this week from a Peruvian casino security camera shows van der Sloot with Peruvian Stephany Flores entering the hotel room she was found in later, strangled.

Alabama – Aruba – Peru – Chile – video and the internet has made our world so much more connected and shows that nowadays, that old saying – you can run, but you can't hide – is proving true. I'm glad the technology can help catch creeps like this, I'm sorry another family has to suffer such a loss before all the elements could come together.

Big Brother IS watching – and has spread worldwide, thanks to technology like that of Google Earth. (It's funny that politicians don't seem to understand this, as they keep making stupid remarks at "private" public forums that someone always seems to capture with a cell phone video camera.)

I looked up the Google Street View map of my house and got a laugh to see that my house was surrounded by garbage cans, because it happened to be garbage collection day when the car made it's rounds, and my neighbors and I all have to place our cans side-by-side in our cul-de-sac. Funny. But by moving the view a bit, I can see my neighbor's house, and there she is, wearing a red outfit bending over picking groceries out of her car while her garage is wide open with personal goods on display. Creepy.

Google Maps have been great with directions, giving walking routes, bus routes, and all sorts of connections. I love it. Most people love it. But at what price is this convenience? As private citizens we have a right to privacy, especially in our own domains – home or online – and, yes, some people might argue that if you aren't committing a crime, why should you care? Because my neighbor surly didn't expect the World to come to her house that day and take a picture of her in her driveway, nor would she have wanted to show off the things she has stored in her garage.

As for me, if I had known that Monday was my day to be photographed by the World, I might have moved the garbage cans so my lovely iris garden could better showcase my home with a more pleasant image and curb appeal than a collection of smelly ugly garbage cans.