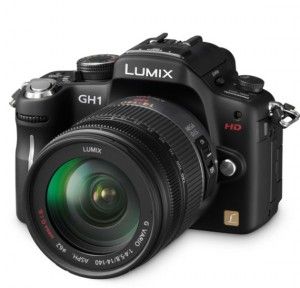 Just a few short days ago, news came out that the firmware for the Panasonic Lumix GH1 got hacked. Now typically, you’d think that was a bad thing, and typically, you’d be right. However, in this case, that is far from the truth. Instead, the firmware hack for the GH1, made by Tester13, allows it to take MJPEG videos with a bitrate of up to 50 Mbps. That’s right; 50 Mbps. This is a higher bitrate than even the Canon 5D Mark II can take right now, with it’s average of 35 Mbps meaning cleaner footage with less artifacts. With the ability to shoot at 50 Mbps, video on the Panasonic Lumix can come out with almost no visible compression at all. The gradients in the footage look smooth and natural, and the detail is, for a lack of a better word, astounding. As an added bonus, since the GH1 scales and processes data by binning individual pixels rather than using line skipping, giving it a cleaner image than a 5D when downscaled from its 12 MP sensor. Also with this hack comes some groundbreaking workflow improvements. Using the 32 Mbit AVCHD mode with this hack, you can edit the native 24p footage natively on a Mac and PC in a fraction of the time.

All this comes at a small price however. First, the camera will often have card read/write errors due to the high bitrate and of course, fills up a CompactFlash card really fast. Also, playing this high bitrate footage will cause many computers to choke. Of course, as a firmware hack, there is at least a small potential that your camera’s hardware could be adversely affected by allowing it to do something it shouldn’t. Lastly, the sensor size of the full frame 5D compared to the smaller APS-C makes for a greater chance for noise.

Nonetheless, hacks like these do effect one thing: they show camera companies how badly their users want these functions in their cameras. You sometimes have to wonder why they don’t just outright develop these same hacks into upgrades that their users can have. It would be a great chance to score some points with consumers that want to get the most out of their cameras and wouldn’t be of any harm to those who would never use the feature. Other cameras such as the Canon 1D Mark IV could also benefit from a small upgrade too. I mean can somebody tell me why Canon still hasn’t gotten rid of the auto gain control in the 7D and 1D too? Hopefully these companies will take a hint and start providing the relatively easy features that users want out of their cameras so that they can feel good about their purchases and feel good about staying loyal too.