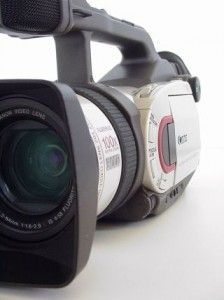 I saw three unusual uses for video cameras recently and was wondering how other people use them – other than the conventional ways ofrecordingfamily gathering or important events in people’s lives.

I’m in the middle of a massive weekend project – removing about 1/2 of the 20+ year old scraggly non-budding out-of-control shrubs from a lush 1/3-acre garden. It’s a big task. I am replacing the old shrubs that no longer bloom, flower, or even produce leaves with native plants that aredroughttolerantand present a more naturallandscape. I wasinspiredby two things: weeks and weeks of excessive rain that made the ground soil soft and easy to dig, [some of these rootsystemsare 3 feet deep!] and about 1/2 of the sprinklers in this antiquated system don’t work and need repair.

So, for the most part, I’ve fixed most of the sprinklers myself, but have had to call in an expert for some of the bigger issues and I was impressed with how this landscape expert assembled his tools. There, lying on the table alongside his PVC pipe cutter, pipe glue, shovels, and various other tools was a small video camera.

Intrigued, I watched him walk around the yard, seeming to talk to himself as he pointed the camera into the holes I’d dug that exposed the broken lines. He then walked back to the stations, and pointed the camera again, and then tested the system, all the while talking to himself.

Curious, I asked what he was doing and did he need a notepad, and he said, no, the camera was his notepad.

“I try to find which station the break comes from, then video tape the break and the station and the connectors, so I can try to find the parts online. These old systems don’t have records anymore, and the model numbers are meaningless, but with video images, I know exactly what I’m looking for.”

I was able to help him at one point with my vast video production knowledge: I showed him how to use apieceof white paper to reflect sunlight into a hole that wasparticularlydark so he could get a better closeup look.

Another use of a video camera thatsurprisedme was by my mechanic a few weeks ago. He was trying to fit a tool into anawkward location, andcouldn’t get the fit right. He called one of the other mechanics to bring the camera, and using it like a mirror, he was able to zoom in and zero in on the fitting.

The third use of a video camera was in a college classroom. A teacher was lecturing ondetailsthat were going to show up on the final and every word was important to note, just in case. Instead of taking the usual small audio recorder for taking notes, the student took a small video camera and placed it on his desk. I asked why and he said because the teacher gestures a lot and some of the audio-only lectures get lost when he’s transcribing the lecture later, but the video recording helps reinforce what the teacher is saying and seems more clear than a small recorder. The mics are better, and can pick up questions form the students. Also, he said with a smile, he can make copies of the recording easily, burn them to DVDs and sell them to students who might have missed the class.

These tricks have made me wonder aboutdifferentways I can use my camera. I need to see if one of the sprinkler lines under the deck is leaking, and have no way of getting under there. Hum. I wonder if I canstrapa camera to the family dog…enticehim to crawl under the deck and wander around until something shows up…?

So, now that my curiosity has been piqued, what do YOU use a video camera for… other than the usual sports, weddings, birthdays, family fun and celebrations? We’re curious, please reply!